It’s a dark mystery theme, with the slot telling the story of a town in England, called Stonehurst. There are several characters from the town and Wraith Manor here, while Nathan Highmore is the one that’s asked to solve a mystery. We see him, along with other characters and Royals, in the game’s symbols. 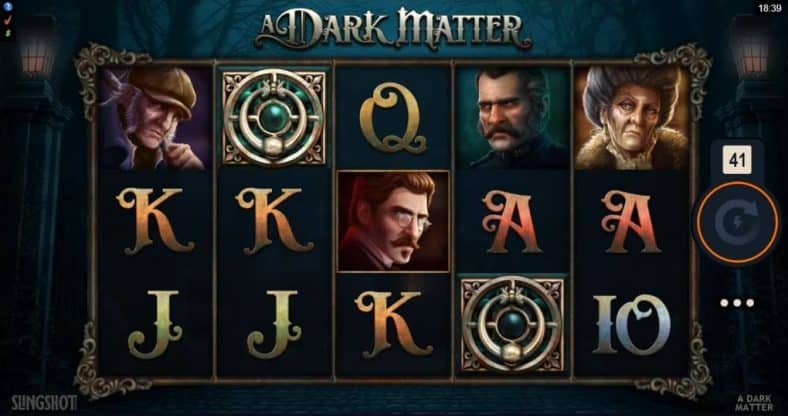 A Dark Matter is a collaboration between Microgaming, a giant of the online gaming industry, and Slingshot Studios, which is a partner of theirs that developed this game as an exclusive release on the bigger company’s platform.

As such, you can only play this game at Microgaming powered casinos, though you should have no trouble locating one. With over 25 years in the business, Microgaming is a giant and a force when it comes to slot machines, though lately they haven’t been launching the same high end games that they offered back in the day.

5×3 reels and 5 active lines, that’s the entire setup of A Dark Matter. Of note here, would be the fact that wins may form both ways, so that takes away some of the sting of having only 5 lines to play with. The slot’s not too complex, but neither is it the type of title where you only get basic features.

The main feature symbols of the game will be its wilds, with three different versions in play.

The regular wild is going to be part of the middle three reels, and from there it will be a substitute for any symbol trying to form a combo. It doesn’t take the place of a scatter though.

Stacked wild symbols can show up on the 2nd or 4th reels, and only during the paid spins.

Invading Wilds are the ones you’re getting when a stacked wild symbol covers a full reel. At that point, it invades a nearby reel as well, and covers it with wilds. You could end up with all three middle reels wild, and that would allow you to form a lot of winning combinations, both ways on the 5 lines.

As for the free spins, to get 12 rounds in this feature, you first need the scatters landing on the middle three columns. Stacked wilds are now turned into super stacked variants. A 2x multiplier is also applied to wins, if it happens that you get stacked wilds covering both reels 2 and 4 (which also transforms reel 3 into a wild).

They decided on a top payout of 2,400x total stake for this game, which means that a $120,000 prize is not out of the question while playing it. Up to 600x rewards are paid for individual combinations, the best one coming from the Nathan Highmore symbol.

The game’s a high volatility option, so while you can win a fair amount from it, the risk can be on the high side as well. Also, at 2,400x the payout isn’t nearly as impressive as what we’ve been seeing in other new slots with high volatility, so this looks more like a high risk/medium reward kind of situation.

RTP wise, the value quoted is at 96.18%, and while this will not apply to you, at least it tells you what the odds are.

It’s not a bad game, all things considered, but I wouldn’t consider it a top choice either. It’s on the simple side, and it has high volatility but its payouts are a bit lower than I’d like to see.