Alice’s Adventures in Wonderland provide the game with the interesting characters and imagery that’s needed, and the result is a slot machine which is going to do great where the visuals are concerned.

Absolootly Mad Mega Moolah, from Triple Edge Studios and Microgaming, is a game with cartoon-style graphics and it relies on a mix of card suit icons in lesser positions, and various characters in the bigger paying ones. As such, you will find the Mad Hatter on the reels, along with the Cheshire Cat, White Rabbit, Butterfly, Teacup and the Pocket Watch. Overall, it’s just a great looking design, and one of the reasons why I’d go with this Mega Moolah title, over many of the older ones. 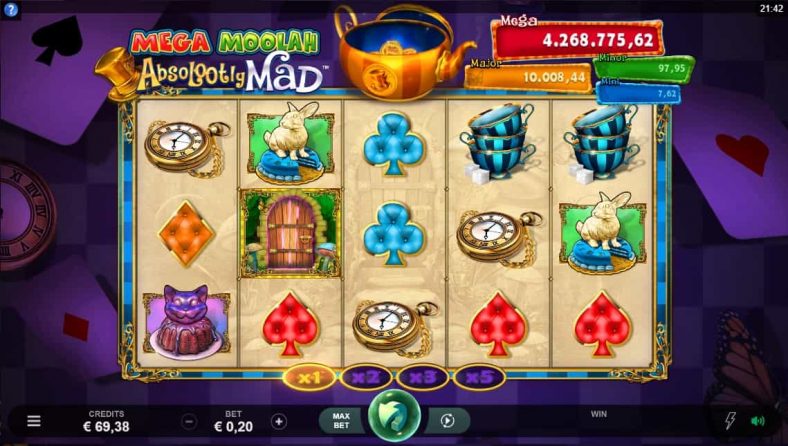 Triple Edge Studios is an independent developer that’s creating exclusive slot machines for Microgaming, one of many actually. Besides Absolootly Mad, they’ve also designed slots like Diamond Inferno, Book of Oz, Playboy Gold Jackpots, or Attack on Retro, along with plenty of others. It’s a young company, but I like what they’ve done so far, it’s one of the better studios from the ones currently working on slots for Microgaming.

You get to play Absolootly Mad Mega Moolah by clicking on the Spin button, but only after you’ve customized the bet for the next round. The range of the options offered is between $0.20 and $50.

In exchange for whatever bet you choose, either low or high, you get a setup with 5×3 reels, where winning combinations will form through 243 ways to win. You will get paid, provided that you have 3or more matching symbols, appearing left to right, on 3+ consecutive reels.

Provided that you get a winning combination, and you get paid, you will see an additional feature trigger next. Called Rolling Reels, these have become quite popular over the last couple of years, in one form or another. They typically remove the symbols which were used for winning combinations, and then will introduce new ones on the reels, for the empty spots.

If additional wins form, this particular version has a multiplier that goes up and boosts the win. The initial round may be at the value listed on the paytable, but the rolls that come next will get boosts at 2x, 3x and 5x. Following the last roll, and the end of the spin, you will find that the multiplier gets back to the original value.

Landing the Door scatter symbol a minimum of three times, gets you 8 free spins. There is a boost to all wins at this point, with the initial rounds paying 3x the usual amount, while the rolls multipliers range from 6x to 15x.

The ultimate target of any Mega Moolah slot machine, is going to be the progressive jackpot. The big one is Mega Jackpot, which resets at a value of 1,000,000 GBP. The others are Major Jackpot (10,000 GBP), Minor Jackpot (100 GBP) and Mini Jackpot (10 GBP). Get into the feature by collecting wild symbols in a special pot, which gives you a chance at triggering the Wheel, spinning it, and getting a prize from it.

On its own, the slot offers rewards of up to 2,343x the stake, which is fine for a Medium volatility option. What is less fun, is the 92.02% RTP that we’re seeing mentioned for this game.

Absolootly Mad Mega Moolah is an impressive new addition to an already very popular series. Mega Moolah jackpots are the world’s biggest and most popular, and you get a slot with a modern design for once, to try and land a life changing payout.