African Quest will take us to the savanna and will give us a bit of a safari experience. It’s nothing unusual for a slot machine, and most games dedicated to this continent will tend to have the same focus.

As symbols, you get the lion (called Kubwa), along with elephants, rhinos, giraffes and zebras. The lesser symbols are the Royals. It’s a good design overall, but nothing that you’d consider special. 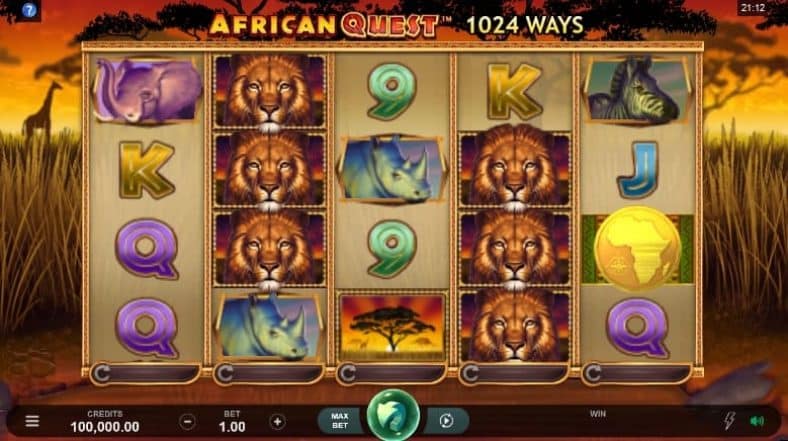 Microgaming is the one that takes advantage of African Quest’s release, as it’s exclusive to them. It’s all part of a partnership that they have with Triple Edge Studios, among others, to create their games for them.

Most of their large collection is not as volatile as this one, so finding something fit for a casual player is easier than this game might indicate.

It’s not the most expensive slot from Microgaming’s collection, with the smallest amount possible for a single spin being only $0.10. You can take the wager up a notch if you want to, up to $15 per spin.

A slot machine with 1024 ways to win, present on 5×4 reels, African Quest will create winning combinations through matching symbols which appear on three or more reels, left to right. It’s been a very common way of forming combinations over the last decade or so, though the paylines are still in first place.

Among the major features that African Quest delivers, the wild symbol is one of those, and it’s a fairly common option. You can find it in plenty of other slot machines as well, and it works the same way here.

You just need it landing on a reel (one of the middle three), and from there it can contribute to other winning combinations. It will only replace regular symbols.

The other one that’s of importance, the scatter, will appear on all reels. Showing us Africa’s map, it will be required to appear three to five times, and in exchange you will get the option of free spins and certain wild multipliers. The bigger the number of triggering scatters, the better the options that you’re offered.

What’s impressive about the free spins, is mostly the fact that you can multiply several wild multipliers. With three wilds at 4x each, up to 64x multipliers are possible in a single spin.

It’s not what the game can pay, since the potential is even higher, but the developer’s cap here is set to 5,000x the stake ($75,000). Microgaming is not a developer that tends to offer high volatility content, so African Quest appears to be special for them. The slot relies on those multipliers in the free spins mode, as well as the 1024 ways to win, to get that high with its rewards.

The RTP is set to 96.02%, which means that a fair amount is expected to come back to the player. It’s not a slot machine that will try to rip you off, not more so than any other game in this space.

African Quest looks like your average slot machine, but has higher volatility than most titles that Microgaming owns right now, so it can be an option for those that have a higher risk tolerance.