Alchemy Fortunes has a big game area, with a lot of symbols showing at the same time, and with a cute design which has a cartoon feel to it. It’s fairly normal for this sort of slot to have this look, and we’ve seen many cluster pays titles in the past doing the same.

The game keeps true to its theme, when it comes to symbol selection. Four top symbols end up showing potion bottles, with red, green, pink or blue contents. Four low symbols come next, and those give us images of gemstones, with colors in orange, green, pink and blue. The portal-like symbol is the wild.

The creator of Alchemy Fortunes is All41 Studios, a developer that’s designing exclusive slot machines for Microgaming right now. You will see this game being attributed to both, as this was a partnership of sorts, and one that has produced several fun games over the last year or so. I’d mention Mayan Eagle, Electric Avenue, or Book of Atem, as a couple of good examples. 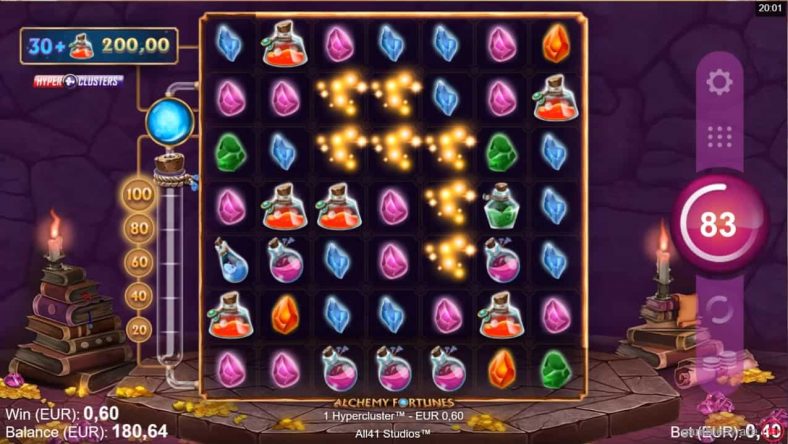 A common betting range has been used inside, where the minimum amount allowed is $0.20, while the highest is worth $100.

No regular lines or ways are available, so the only way to get paid is to have a cluster of matching symbols, connected horizontally and/or vertically. A win requires at least 5 matching symbols in a cluster, but for the best rewards you will need 30+ symbols. This system is called Hyperclusters in Alchemy Fortunes, and Cluster Pays in most other slots.

Forming a cluster and getting paid is only the first step. The Rolling Reels mechanic will trigger immediately after, clearing symbols which were in clusters, and replacing them with new ones. If new clusters form then, the Rolls keep coming.

You also get a bit of help from the Wild symbol, the one which looks like a portal. As long as it appears next to a group of regular symbols, it can participate in any cluster that they may form.

Losing rounds may get up to 6 wilds added to the game area, which has the potential of turning the spin into a winner.

A Magic Potion Meter is present next to the reels, with numbers at 20, 40, 60, 80 and 100. What this means, is that for every 20 symbols removed following winning clusters and Rolling Reels, you advance on the meter. At each level, a feature will be triggered.

The options include Potion Swap (all top symbols are turned into a single symbol), Summon Wilds (adds random wilds), Gem Crush (removes gems and brings other symbols), Alchemy of Wilds (brings back any wilds that you had previously), and Fortune Free Spins (5 free spins).

For a game such as this, where the volatility is expected to be High, you’d want much higher rewards to be possible. Alchemy Fortunes only promises a 1,100x jackpot, which is fairly low, if used as a motivator. However, they did include a good enough RTP, at 96.41%, so it’s not an actual issue, just a matter of preference.

Alchemy Fortunes looks like a decent slot machine, with a variety of features that you can explore, but which doesn’t motivate you with a big enough prize. It’s also highly volatile, so the risk involved might not work for everyone.