For the game’s theme, we’re looking at a story about the warriors of Ancient Greece, obviously inspired by the 300 Spartans which fought at Thermopylae against the Persians.

We’re seeing both sides here, with one of the symbols giving us the Persian king, another one with the Oracle from Delphi, and then the Spartan King, another character, swords and shields. The final half a dozen symbols involve the presence of rather simple Royals, even though they’re using gold-colored designs. 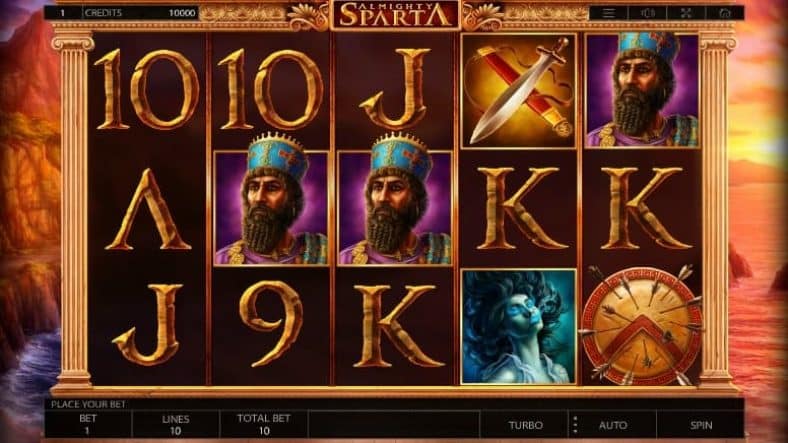 A company which originates in the Czech Republic, Endorphina has been founded 7 years ago, in 2012. The company has become well known in a relatively short amount of time, thanks to their work in game development, having more than 50 slot machines released since then.

They can generally be counted on to offer decent games, with RTP being somewhere around 96% or 97%, so they’re typically at least decent picks. Games like Satoshi’s Secret and The Ninja even got awards in the past.

Endorphina slots tend to rely on a betting system which gives the player complete control, but as a downside it’s not very easy to see that those options are available. You have to click on the displays giving you the number of lines, coins and coin denominations, to change them. While doing so, you can get up to 10 lines, a maximum of 10 coins per line, and a coin value of up to $1. The complete range of the bet is $0.01 to $100.

It’s a 5 reel/10 lines slot machine, and it pretty much works as expected. 3+ symbols of the same type need to appear on the same line, to get you paid.

Expect to see King Leonide among the slot’s symbols, and it will be used as a stacked wild when it does appear there. You get it to be a substitute for regular symbols, and typically you will have it part of several active lines. It doesn’t give you any rewards directly, and it also doesn’t take the place of a scatter, but those would be its only limitations.

Moving on to the scatter, it’s the image of a Shield with arrows sticking out of it that’s used for it. If you get a minimum of three scatter symbols to show up, the game delivers 20 free spins and a 4x multiplier which is used for all wins. It should also be noted that there are some excellent payouts paid by scatter symbols, right before the free spins trigger. Anywhere from 2 to 5 Shields will give you a prize, which goes as high as 500x total stake.

With an RTP that’s set to 96%, Almighty Sparta tends to pay reasonably, at least over the course of its entire life. As for the rewards which the game can deliver, a payout of 5,000x total stake should be a possibility in the base game, while the free spins can give you 4x as much, thanks to their multipliers. To get that much you’d need the entire screen to have only high paying Persian King symbols though (wilds may help).

Almighty Sparta, with its excellent prizes, average RTP, decent graphics and good enough features, is an OK game to play, particularly for those interested in a chance at huge jackpots. 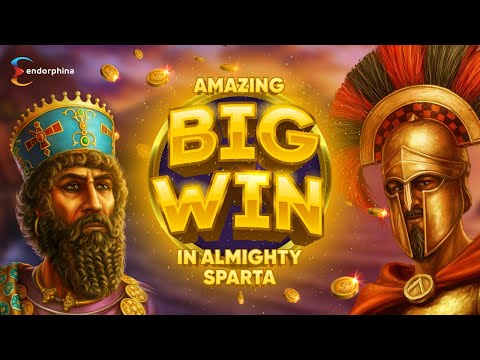