There’s something incredibly peaceful about just staring out at the sprawling mountains. With not a gust of wind to disturb the beautiful stillness, you can just look and let your mind wander freely. Add the beautiful Northern Lights to the starry night sky, and you have perfection itself. That’s the backdrop to Microgaming’s Arctic Magic, cementing its status as a gorgeous slot.

So if you’re looking for a pretty game, you’re in the right place! Sure, the animations aren’t quite as amazing as the background itself, but that’s alright. The Art Deco design of this game shines through, which we really like. A lot of developers have used this style in recent years. If you enjoy it, then this release is a must play.

In terms of special features, Arctic Magic doesn’t really offer that much. In fact, there are only two bonuses in this slot! The first is a free spins bonus, with all wins subject to a 3x multiplier. The second is a 2x multiplier which is attached to all Wild symbols. 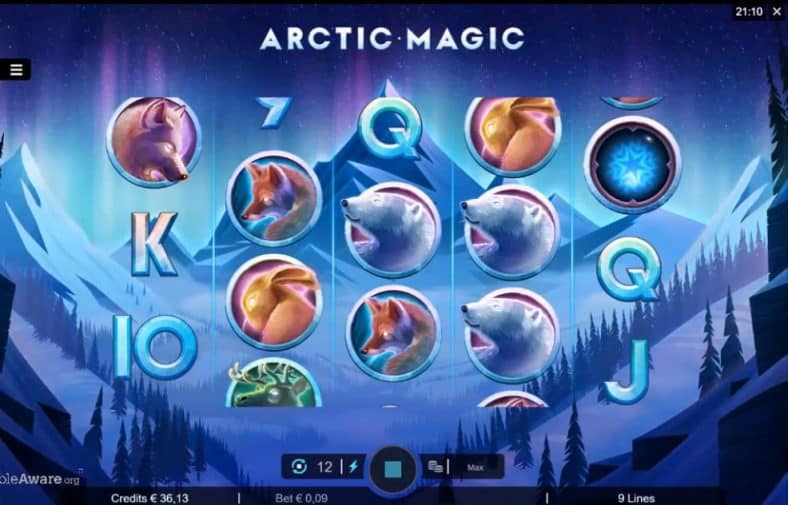 Microgaming is a seasoned developer. Alongside NetEnt, they’ve been one of the first companies to embrace online gambling. In recent years, the developer has chosen to make less games on their own, and to instead partner with smaller studios.

The results of this has sadly been somewhat mixed. Still, Microgaming does occasionally launch a slot or two of their own. Their quality isn’t as amazing as it used to be. But the games they launch are still quite good.

This release is played on a 5×3 board with 9 fixed paylines. Players can adjust their bet size by dragging the slider, or choosing one of the pre-selected wagers. Gamblers can wager between $0.09 and $45 on each spin.

The layout has been kept clean and simple. The mobile and desktop versions are almost exactly the same. It feels a bit awkward on desktop, but it otherwise works out quite nicely! It takes a bit of getting used to. But once you get used to the layout, it works quite nicely.

Sadly, Autoplay doesn’t work as great. You can only select the number of auto spins to be played. There are no win or loss limits or single win limits. Definitely something Microgaming has to fix if they hope to improve the player experience!

Symbol designs are a mixture of somewhat bland to really cool. The playing card royals don’t really draw our attention that much. But all the animals have been drawn quite nicely! We’re not sure how we feel about their glowing eyes, we have to admit. It looks cool, but it makes some animals look weird.

Collect three, four or five Scatters to unlock fifteen free spins. Collect three or more Scatters, and you can retrigger the bonus, awarding fifteen additional extra turns. While free spins are being played, all wins are tripled in value.

At the same time, all Wilds have a 2x multiplier attached. That means if a Wild fills in for another symbol, the prize from that winning combination is doubled! On top of that, if you combine it with the free spins, you can increase the prize with a 6x multiplier!

Arctic Magic has a high volatility, and a jackpot worth 3,333x your total stake. The slot could offer more, but the max win is capped at $150,000. This game’s RTP is 96.10%, which is above the current industry average.

We can’t say that this Microgaming release blew our minds or anything. It was a pretty slot with a few simple special features. If you were hoping for an amazing game from this developer as a return to form, this isn’t it. But if you’re just looking for something simple to pass the time and score a decent jackpot or two? Then Arctic Magic is for you.