It’s a slot machine with a design that’s inspired by Ancient Rome. You get excellent graphics in it though,  at the level that you will find many other modern releases these days. As symbols, the mix is not a particularly inspired or unique one, using images of the Colosseum, the Emperor, Coins, along with four gladiators and the usual Royals. 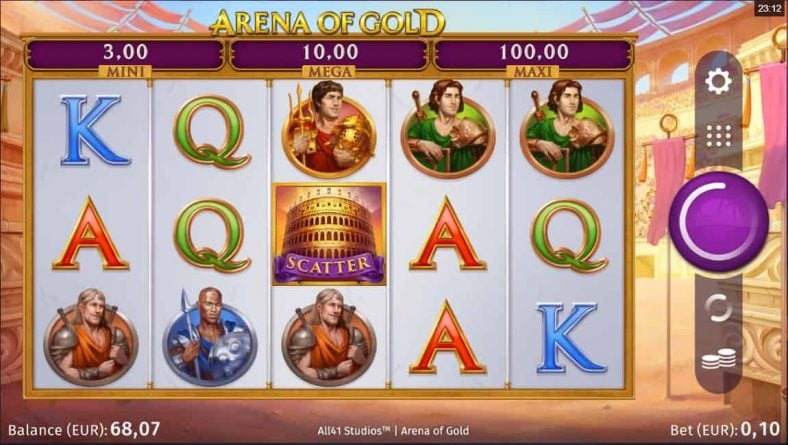 All41 Studios, in collaboration with Microgaming, is the developer of Arena of Gold. The young studio has an agreement with the giant, to deliver exclusive titles for their collection, as part of a program that has many other small companies doing the same thing. They’ve designed decent games so far, and Electric Avenue is another recent release of theirs, but I wouldn’t say that they tend to have must try titles.

It’s not a game that will require a lot of resources, in order to play it. With wagers starting from a minimum of just $0.10, just about anyone can try it out. Those with bigger budgets can increase the amount wagered to as much as $50 per spin.

The setup is a regular one, with 5×3 reels getting 25 active paylines. The features included are not that special either, they’re found in other slots in similar form, though the inclusion of giant symbols does change things a bit.

One of several major features that were introduced in Arena of Gold, the Emperor Wild is going to serve as the standard substitute, a symbol that you will get to use in order to form new wins. It’s of no use to you, if you need help with the other feature symbols though, but replacing a scatter is almost never its job.

One of two scatters that you will encounter in this game, the Colosseum is going to be your way into the free spins mode. Only three reels get it, and so three scatters will suffice to get you to this stage. You receive 5 free spins initially, but there is some room for retriggers, as three additional scatters will get you 3 more rounds.

What makes these free spins interesting, is the fact that the middle three columns will merge, and get you a single big game area in the middle, where giant symbols are used. 3X3 symbols will certainly improve the odds of multiple wins happening at the same time, provided that you get the rest of the required symbols for a combo on reel 1, and hopefully reel 5 as well.

Similar with what we’ve seen from other games, Arena of Gold also incorporates a Re-Spins feature. Whenever you find a minimum of 6 Coin scatters on the reels, in a single round, you get Golden Re-Triggers. These are 3 re-spins, during which you only use blank spots and coins on the reels. Any new coins that land, besides the ones that triggered the feature, will be locked alongside those on the reels. The re-spins will reset back to 3 when new coins land, but once you get through those rounds, or when the reel is filled with coins, the feature is over.

As the Re-Spins end, the game takes a look at what you got, and it will assign cash prizes to those coins, or fixed jackpots. To get the big fixed jackpot, worth 1,000x the stake, you will need the game to have all 15 positions covered by coins.

Payouts of 2,500x the stake are among those that you can expect to be playing for, in Arena of Gold. The game also includes several fixed jackpots, the best of which will pay 1,000x the stake, so there are additional decent prizes to be had.

For the type of game that this is, with the volatility considered Medium, the top payouts which are promised I’d say that they’re good enough. It goes well with the slightly above average RTP, of 96.20%. All in all, a game that might work both for casual players that want a bit more excitement, and for veterans that are looking for a little less of that.

Arena of Gold gives players a couple of features that look good, but there is nothing unique about it. The medium volatility of this one will recommend it to players that want the middle of the road, as far as risk/reward ratio is concerned.