If you liked Arnold Schwarzenegger’s sci-fi movies from the 80’s and the 90’s, you will definitely love the overall appearance of Attack on Retro, a five-reel, 10-payline video slot brought to us by Microgaming and Triple Edge Studios.

We are going to the future, a sort of retro future, where robots, cyborgs and humans live together. Playable from $0.10 per spin, the 2020 release offers plenty of additional features players can benefit from.

The two main characters, Jesse and Billy are the two Wilds that can cover entire reels. The robots that stand on the side of the reels will add random Wilds both during the base game and the Free Spins feature. Free spins come with win multipliers and Wild reels, for bigger wins. Gamers can win up to 5,000x the bet in a single spin. 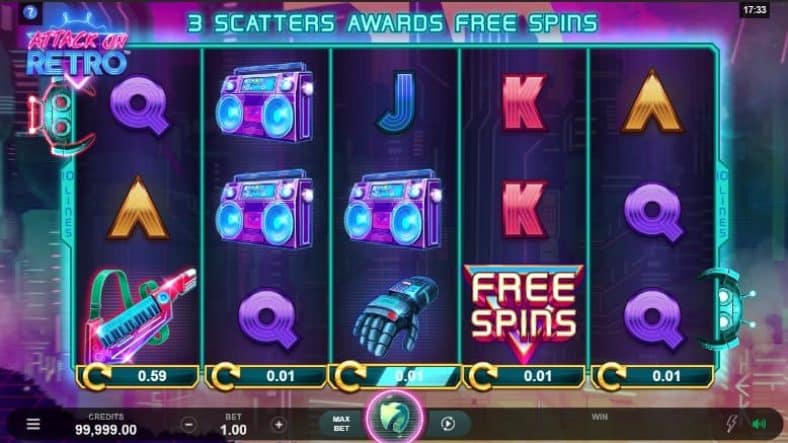 Triple Edge Studios prepared the Attack on Retro video slot for the iGaming giants Microgaming, according to their agreement from the beginning of 2018, where it was agreed that the independent global game studio will supply exclusive content to the company that created the first ever online casino software.

Microgaming has been around from 1994, and they are the pioneers of the industry. Apart from video slots, the founding member of eCOGRA also offers other casino games to their loyal followers.

Gamers are taken to a futuristic city, where robots are preparing to attack the inhabitants. Jesse and Billy will be there to help you defend the citizens, and they also act as Wilds that substitute for all other regular symbols.

They can cover entire reels. The robots will also add Wilds on the reels from time to time. Apart from simple playing cards that act as low-paying icons, players will come across Hoverboards, Stereos, Guitars and Robotic Hands. The Scatter appears only on the three central reels and triggers free spins.

When talking about the rules of the game, they are as simple as breathing. The Microgaming title features five reels, three rows and benefits from 10 fixed paylines, which pay left to right, starting from the leftmost reel, with three of a kind being the minimum for landing payouts. Betting is fixed at 10 coins per spin, but the coin denomination can be changed, so you can wager as low as $0.10 and as high as $20 per single spin.

The Respin feature is available after any spin. For a certain price players can choose to respin a particular reel, not all of them, in order to land a rewarding winning combo or trigger freebies. Every reel will offer a different respin price.

Land Scatters on reels 2, 3, and 4 to trigger free spins. Gamers will pick between three options. Get 10 freebies with a 1x win multiplier. Five free spins come with a 2x multiplier, while 2 free spins offer a 5x multiplier. During the feature, reels 1 and 5 are completely Wild and Jesse and Billy will take turns appearing on them as full-reel Wilds. Also, the Random Wild feature is active, so you can get more Wilds on the reels.

The biggest win can be expected during the Free Spins feature, especially if you select the option with the 5x win multiplier.

Sci-fi movies from the 80’s and the 90’s were extremely popular at the time, and we feel that Attack on Retro will be very well received among gamers across the globe.

The visuals are very good, as well as the soundtrack, while the special features incorporated will keep you busy for a very long time. Our personal favourite is the Free Spins feature, where you get win multipliers, two Wild reels and Random Wilds that can appear on any freebie. Such a combination can easily surprise you with a sweet payout.