It often pays off for developers to create slot machines which use people’s passions as inspiration, and fishing themed titles are a good example of that. The ocean is the backdrop in this new Thunderkick slot machine, and there are coastal cities shown on both sides of the image, which gives us an images the bay.

With an almost comic book style for its symbols, at least the better ones, I’d say that we’ve seen better looking slots from Thunderkick in the past, but this one doesn’t look too bad. It starts with a boring spread of Royals, each one in a different color, and going from 10 to A. It goes on to show us a variety of fish mounted on plaques, as trophies. There are four fish shown that way, colored in red, green, blue and purple. The top symbol is the one showing us the fisherman with a white beard, smoking a pipe.

It’s Thunderkick that’s proposing this game, and you can expect from them an intriguing collection of slots, which they’ve worked on over the years. Not the biggest collection around, but there will be titles like the ones from the Beat the Beast series, along with fun options like Bork The Berzerker, or Esqueleto Explosivo 1 & 2. 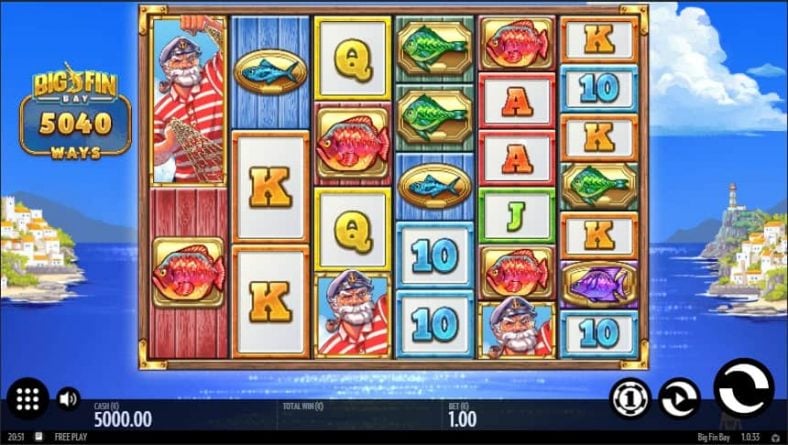 $0.10 is low enough, that the vast majority of the players would afford it as a wager. In case you really like the slot, and you have the budget for it, wagers as high as $100 are also available for you to select.

There are 6 reels here, where the number of ways to win can change dramatically, so you get anywhere between 5,040 for its paid spins, to as many as 117,649 once you get to the free spins. As long as you have 3 or more symbols that match, and on consecutive reels starting from the 1st one, you get paid. It’s not quite the standard setup though, as you get 2-3-4-5-6-7 symbols on its 6 reels, with the option for the setup to reverse and go from 7 to 2 symbols.

The image of the wild symbol relies on its own logo, but it will show a golden marlin behind it. These are expanding wilds, which can be incredibly useful, especially on reels with bigger number of symbols. Of course, they are going to act as the slot’s substitutes.

Mystery Wilds can be added to the game area, at random times. This will transform 1 to 3 reels into full wilds.

18 to 36 free spins can be triggered, via 3 to 6 scatters making an appearance at the same time. There is an extra role assigned to the expanding wild, which now has the ability to go through a respin as well. At this time, you will find that the reel expands by one position, and it remains that way. This in turn allows for the number of ways to win to get a boost, though only if it has fewer than 7 symbols at the time. For each expanded reel, you get 3 more free spins. Eventually, you could end up with 117,649 ways to win, from 6×7 reels, if they all expand.

It does it differently, but Big Fin Bay can end up having as many ways to win as a Megaways slot, and so the potential payouts can be just as impressive. In this one, jackpots of up to 15,040x the stake are possible. The cost is the high volatility of the slot, but the game has a 96.14% RTP.

Big Fin Bay looks good, and it should be an interesting alternative for the Megaways slots, a decent pick for anyone that can take the brutal volatility of these games.