Fans of horror and vampire stories can find Blood Lust video slot by ELK Studios their cup of bloody tea. This vampire-themed slot presents a series of scary, yet charming, nocturnal creatures. Reels are positioned in front of a spooky landscape taken out from your worst nightmares, but they don’t look more gullible themselves.

Four themed symbols are two guys and two girls with glittering stares waiting to suck the blood of the unsuspecting passers-by. The upbeat music contributes to the overall aura of suspension and supernatural. 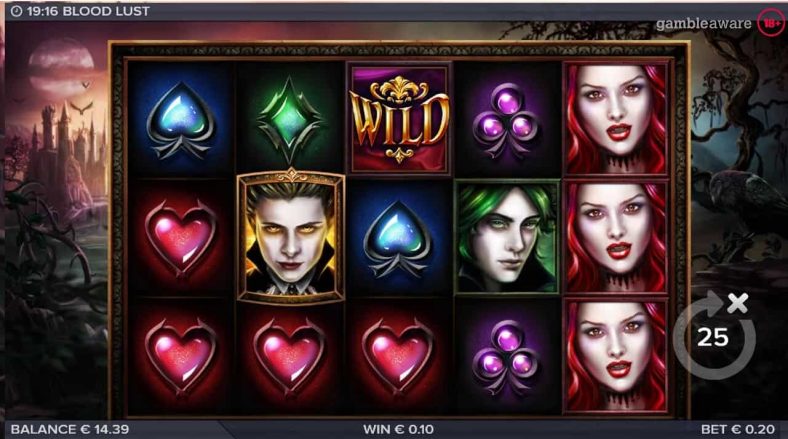 ELK Studios is a young, but productive slot specialist based in Sweden. There is huge rivalry worldwide among developers of online video slots, but nowhere so visible as in Sweden.

What ELK has been doing since their establishment in 2013 in order to survive the fierce competition of their compatriots organized in NetEnt, Quickspin, Yggdrasil and Thunderkick, is looking out of the box. ELK Studios are always in search of sophisticated programming solutions that make the gameplay a little bit more dynamic and out of the ordinary.

At the same time, they are providing crisp graphics and inspiring soundtracks to make the games more attractive to the broad audience. Considering the pace they keep with new releases, there’s no doubt they are doing the right job.

Blood Lust video slot comes with whooping 99 paylines and a standard grid of 5×3. Each bet is worth 100 coins, and it is possible to select 12 different bet levels ranging from $0.20 to $100.00. Unlike traditional games, with Blood Lust, players can choose the betting strategy.

A click on the Bet button opens the menu in which it is possible to adjust the future bets according to the gaming preferences. The Optimizer strategy adapts the betting level automatically according to the percentage of the balance at disposal.

The Leveller raises bets two levels after five consecutive losses. The Booster strategy raises the bet 1 level after a loss until it reaches four levels above the base level. The Jumper strategy is more optimistic – it increases the bet 1 level after each win up to 4 levels above the base level. Regardless of the strategy, three identical symbols are necessary to claim a win.

In addition to offering amazing 99 paylines, Blood Lust is a feature-packed video slot. The Boosted Respin feature is activated by the special Respin symbol represented by the three candles.

Additionally, each spin comes with the so-called Boosted Stacks feature which includes filling the stacked fields in each reel with random symbols. The Bonus Game (Free Spins) is triggered with 3 Bonus symbols appearing anywhere on the reels in the base game.

How many Free Spins will be awarded depends on the number of symbols included in the rectangle that surrounds the Bonus Symbols with the maximum being 15. The Bonus Game has a unique gift – the Vampire Metre that counts all the Vampire symbols that show up.  When the metre is full, another free spin is awarded, and the all the different Vampire symbols are replaced with Dracula symbol which significantly raises the chances to win.

With the Return to player percentage of a little bit above 96%, Blood Lust video slot ranks among the average in terms of average payouts. However, the maximum payout proudly stands at 2,500x bet. This sum can be won in the Bonus Game.

Blood Lust is an enjoyable game to play with many characteristics that raise this video slot above the swathes of ordinary online games of chance.

The theme is not a novelty, but it looks very nice and allows the players to dive into the otherworld. ELK Studios made sure to include the Betting Strategy option in this game which gives the players a chance to pre-program their strategy and monitor the results without the effort. The special features are an essential part of Blood Lust with the Bonus Game being especially attractive.

The way to determine the number of Free Spins is very original and exciting, while the Vampire metre suspension boosts the adrenaline. The players searching for huge wins can find the max payout of 2,500x bet an important reason for adding Blood Lust to their favourites.