Ah, a pirates life! Really, there’s nothing like it. You sail across the open seas, singing shanties with your mates. You plunder the vessels of wealthy merchants and might nations, and make off with their riches. The only authority above you is the captain and God himself! In our current world with clearly defined rules everywhere, the fantasy of ultimate freedom will appeal to many.

What’s on the board itself isn’t that impressive. But everything around the playing field is really cool! The docked ship lies in wait, looming over the nearby village. There’s even a night mode, which makes the background look even cooler! And every now and then, our pirate mates will get drunk and fire the cannons, giving us an even better view.

The sound of cannon-fire also adds extra rows and reels in the Boom Pirates special feature. Other bonuses include symbol swapping, a free spins round, and two purchasable special features. 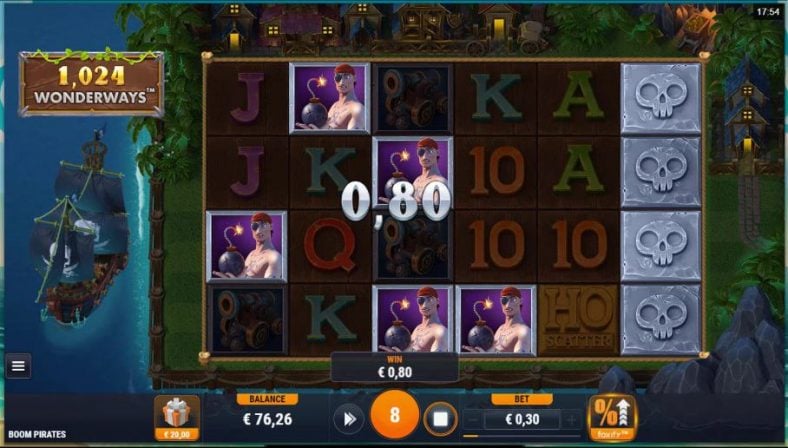 Foxium is a relatively new developer on the scene. The Estonian development studio started in 2015, and has put quality as their priority. Unlike most other software providers, which try to make a new slot every month, Foxium takes a different approach.

They work on their game for a few months, making sure that it’s fun to play and great to look at! Sadly, this does mean we have to wait longer for their releases. But when they finally launch, we know it’ll be a stellar experience.

Boom Pirates is initially played on a 5×4 board with 1024 ways to win. We say initially, because one of the special features can increase the size of the playing field to 6×9! The ways to win increase accordingly, from 1024 to 10,077,696! Your total bet can be adjust directly from the main screen. You can stake between $0.20 and $75.00 on each spin.

Foxium successfully finds the balance that makes the modern, minimalistic user interfaces successful. All the important aspects, such as total bet, auto spin, quick spin and buy-in special features are directly available. Meanwhile, things like settings and paytable are hidden in a menu.

Click the Autoplay button, and the slot will reveal a new menu. Here, you can choose the number of spins up to 100. You can also set your loss and single win limit: which we recommend setting so you don’t lose too much, or can bask in the glory of a massive prize.

We really like the graphics! When you first launch the game, you see this sprawling playing field. Then, it zooms into your current board, which shows off a small, island village, likely the pirate hideout! You can appreciate it both during day and night! Unfortunately, night time will cost you extra, as it’s tied to a special feature you have to enable using money.

Playing card royals remain the same, colourful distraction they always are. And while we’d like to say they’re our only gripe, they’re not. The unique icons also feel a little basic and bland.

Tap the Foxify button on the user interface to increase the chances of winning free spins! This enables night mode, but also increases the cost of each spin by 50%. So, when this bonus is enabled, it’ll now cost you $3 for each spin instead of the $2 per spin you used to pay.

You can also directly buy 10 free spins for 100x your total bet. Way too steep for our liking, but beneficial for high rollers who want to skip the grind.

Boom Pirates is a special feature which triggers randomly. The ship will fire cannonballs, which blow up stone blocks and expand the board. The extra spaces on the playing field also increase the number of ways to win, up to 10,077,696.

Another random bonus is Mary’s Swashbuckling Attack. The female pirate swings on a rope, changing some symbols, and awarding a five-of-a-kind win!

Collect three Scatters in the first, third and fifth reel to win 10 free spins. Three more Scatters during free spins award five more extra turns. During this special feature, extra cells on the playing field can become active. And once activated, they remain that way until free spins end.

The volatility of this Foxium release sits somewhere between medium and high. It has a top prize of 3800x your total stake, with an RTP of 96.19%.

Boom Pirates is a stellar slot, and well worth the six month wait! Every special feature is fun in its own way, and they appear frequently enough thanks to the developers tuning the game properly. An above average RTP and a great jackpot just sealed the deal for us. Give this release a try – you won’t regret it!