Wildlife has been a popular choice among developers, when it comes to slot machine themes, and the symbols used. However, while most of them go for the standard image of the creatures, perhaps in cartoon form, in the case of Born Wild we’re looking at versions that are almost logo-like.

I’m talking about the symbols showing us the Cobra, Tiger, Gorilla, Rhino, and Panther, while the Lion and Bear are the feature symbols (with the Wild logo present as well). Lower symbols rely on the noises made by the five animals from the top, so they have words like Roar, Grrr, Hisss, Claw, or Hawl, as their logos.

Though they’ve specialized in scratch cards initially, Hacksaw Gaming has recently expanded into slot machine design as well. They’ve done an awesome job so far with it, particularly because of the generous top prizes that they’ve been including. Two other games for you to check out, would be recent releases like Hop N Pop and Stack Em. 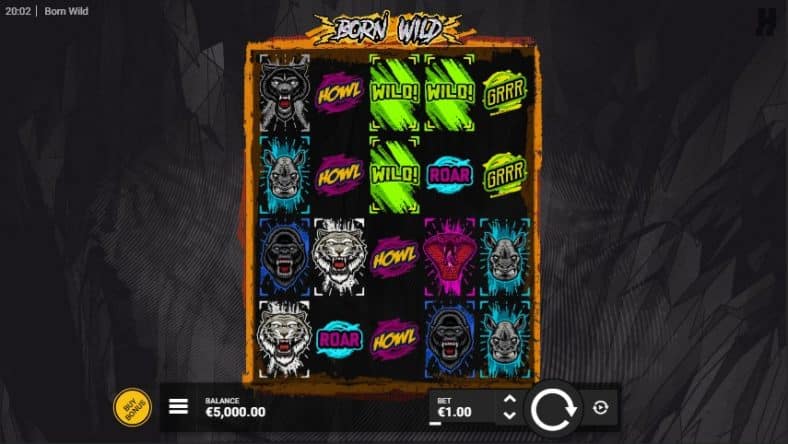 Like in plenty of other new games, you only have to select the total amount for the round, not the line bet as well. The range given to it is between $0.20 and $100.

First of all, I would mention the game’s Wild, since it uses its own logo, and it’s easy to spot on the reels. It will pay very well even on its own, up to 250x the round’s stake for a combo, but it is also available as a replacement symbol.

With the Bear symbols landing three times on the reels, the slot grants you access to 10 free spins. In this mode, you’re playing with sticky wilds, so by the time you’re done with the feature, the spins could be a lot more likely to be profitable.

Ultimately, the target of the game is going to be on the Lion’s Roar Respins. It triggers through its own scatter symbol, the one with the Lion. It’s a Hold & Win style feature, but with a twist. You only get 1 respin here, and you’re starting with the triggering Lions sticky, while trying to get additional ones to land. If they do, then 1 extra respin is given, and so on. You can’t have any spins without a new symbol, or the feature will end. When that happens, the Lions turn into sticky wilds, for one last spin, and regulars will show up in the rest of the positions, so you can at least try to form some regular combinations.

While extremely difficult to fill the reels, the payouts are much more impressive here, compared to other slots. A $10 million jackpot is mentioned, for the players that get Lions in all 20 positions.

$10,000,000 is the top jackpot that is promised in Born Wild. It’s the size of the prize that will get the player’s attention, but there is also the high volatility to take into account, along with the very low RTP, of only 93.78%.

The game definitely gets your attention with that huge top jackpot, high enough that it would’ve typically been paid only through some very rare progressive jackpots. Here, it is a reward in one of the game’s features, but it’s incredibly difficult to get, and the RTP is about as bad as in a slot with progressive jackpots.