The series doesn’t appear to have a certain theme that it focuses on, and so we end up looking at pirate themed symbols in Bounty Pop, the latest slot from AvatarUX to join Yggdrasil’s collection. As before, the mechanics make it special enough, and the graphics are very good, even though the style is not the one you typically expect from such games.

Major symbols in this slot will feature a number of pirate characters, each one showing off some sort of weapon, from muskets to clubs. Eventually, in the lower paying positions, you also discover the less impressive Royals.

AvatarUX has done a great job designing the PopWins series, and Bounty Pop is no different. Yggdrasil Gaming is getting the credit a lot of times, but the smaller developer is the one that worked on the slot directly, and they should be mentioned. 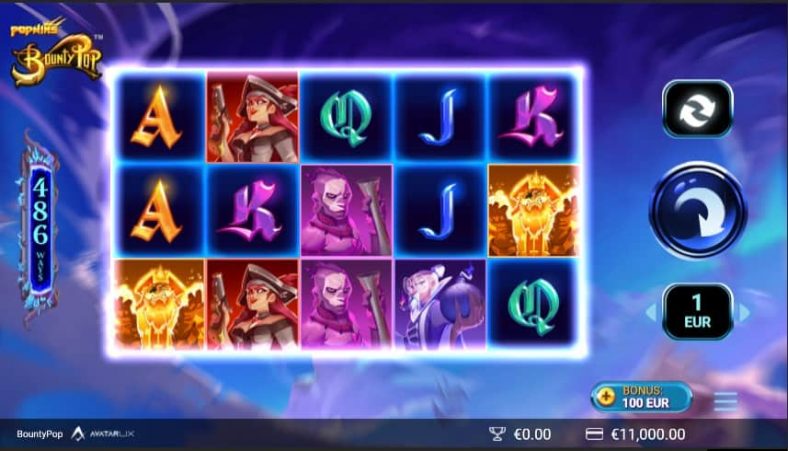 In exchange, you will get 5×3 reels and 243 ways to win which pay both ways (mentioned as 486 ways as a result). As long as 3+ matching icons appear left to right, or right to left, you get a combo formed and you get paid.

Once you’ve formed your initial combo, that’s when the magic happens and the PopWins system kicks in. It allows the reels involved in the win to expand, giving you 1 additional symbol on each one. This boosts the number of ways to win. As the previous symbols pop and go away, new ones will replace them, and this may lead to additional Pops and up to 6 symbols on each reel. During paid spins, you can have at most 7,776 ways to win active, if you go far enough with these Pops.

There will be scatter symbols in the game as well, and through them you can get 6 to 12 free spins (in exchange for 3 to 5 scatter symbols). It’s a bigger game area now, which can expand up to 9 symbols per reel, and so you could have 59,049 ways active, in a best case scenario. Between spins, the reels will not reset fully, they just go down to the level of the smallest reel.

If the reel expansion system wasn’t enough to get you excited, then perhaps the multipliers from the Mystery Wheel may do it for you. This is a feature which is triggered once you get all reels at the maximum number of symbols (6) during paid spins. It triggers during free spins as well, but there you have different wheels for different reel sizes.

55,000x the stake is a jackpot which shows the true potential for the PopWins series. It’s coming from a game which is going to pay only about once for every 5 spins though, and the volatility will be very high, so it’s not for everyone. Its RTP is where you’d expect, at 96%.

Bounty Pop will be a good fit for the players that enjoyed the previous PopWins titles, or for anyone already used to high volatility slots. It’s risky enough to play, that I wouldn’t recommend it for all players.