Microgaming continues its Break Away series with the Lucky Wilds edition, a slot machine which ends up using the same graphics and symbols as we’ve seen in the previous two installments. The first title was launched in 2012, and since then the graphics haven’t changed much, but that doesn’t stop the game from being appealing.

Even better, there are only themed symbols on the reels of Break Away Lucky Wilds. You get the icons with the Zamboni machine, a referee, ice rink, several players, helmets and skates, along with the game logo as the wild.

A developer which claims to be one of the first companies to activate in the online gambling niche, Microgaming has been designing slot machines for decades now, and they have hundreds of excellent titles. Some of them are even getting sequels these days, and obviously Break Away is one of those series that are receiving attention. 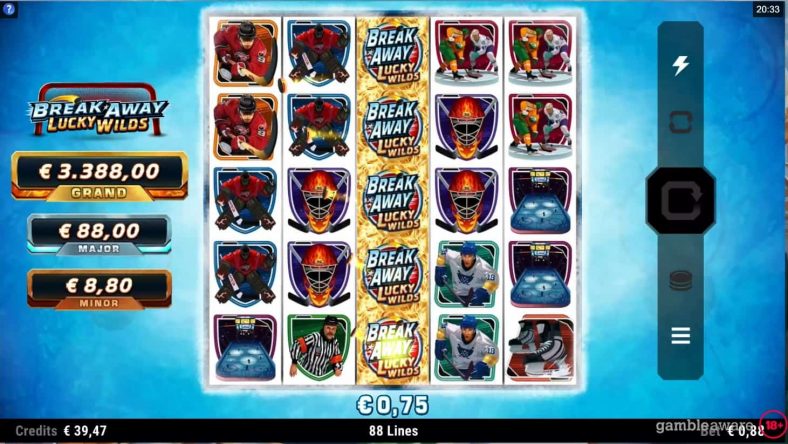 5×5 reels will be part of the game area in Break Away Lucky Wilds. The slot’s giving you 88 active lines, so they do make use of that big setup. As long as you get 3+ symbols of the same type on a line, and going from left to right, you will get a prize.

Rolling Reels is the name of a mechanic that Microgaming has used several times over the years, and it is found under different names at other developers as well. It requires a winning combo to trigger, after which it will remove the symbols that are part of it, so that others can come take their place. If more wins form as a result, the Rolling Reels continue to trigger.

Wilds are found only on the middle three reels, but the advantage is that they show up super stacked, so you could get up to 5 positions on a reel, and they have a decent chance at contributing to many wins on those 88 lines.

Smashing Wilds is another one to pay attention to, a feature which triggers at random and gives you one wild reel, with guaranteed wins for the round. The wild reels are not removed by the Rolling Reels, so the potential is there for a lot more.

If you get the scatter symbols on 3 to 5 reels, the usual free spins will trigger, but there is also a jackpot of up to 888x the stake to be paid first. You get several types of free spins, but the more volatile ones are there for you only once you get the feature triggered 5 and 10 times, respectively.

There is a Jackpot feature as well, with a random chance at triggering it, improved if there are more collected wilds. Up to 3,850x the stake is paid by the Grand Jackpot.

A top jackpot of 11,363x the stake, or $100,000, is the highest that the game will go, but it’s quite OK. Even though the slot has high volatility, it pays handsomely if you reach its maximum potential, and until then it also offers a reasonable amount back to players (RTP is 96.89%).

Break Away Lucky Wilds is an improvement over the previous games, with big wins and high RTP, but also with high volatility. The graphics are the same, but you don’t have to change something that works, and the look is still great, even after all these years.