Buffalo Stack N Sync has the sort of theme that’s proven itself already, with the Wild West being its main source of inspiration. The desert regions of North America serve as its backdrop, so the vegetation visible there will take the form of cactus plants in various shapes and sizes. It’s well done overall, even though it doesn’t deliver anything you haven’t seen before.

The initial few symbols are five Royals, from the 10 to an A. We then see top symbols with wild horses, mountain lions, wolves, eagles, and buffalo. Cactus plants and logos are the slot’s feature triggers.

Whether it’s slot machines or scratch cards, Hacksaw Gaming is a good provider of content for online casinos. Some of their more popular and recent titles, include slots like Outlaws Inc or Itero Echospins. 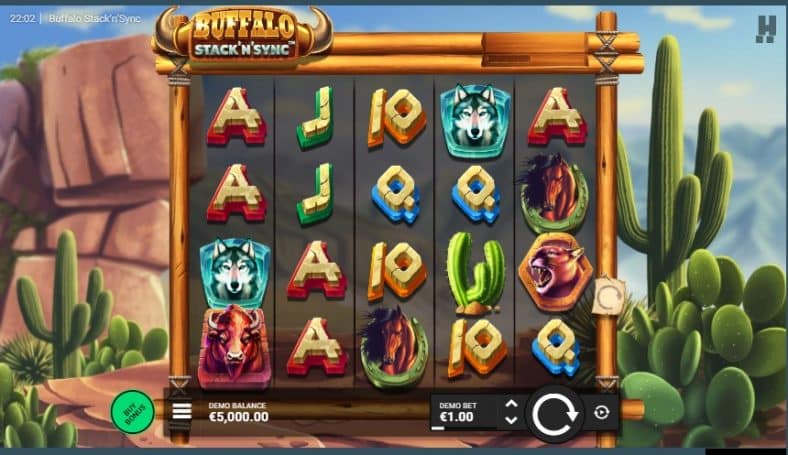 Pick the wager for the next spin, and you’re good to go. While the minimum bet allowed is $0.10, the maximum one that you could use is $100.

You’re going to get only 10 active lines here, even though you’re playing on 5×4 reels. Given the game area size, only about 1% of potential combinations will be available to you, and winning doesn’t come easily.

Cactus Wilds may appear on the reels, ready to be used as replacements for regular symbols only. Winning combinations with 5 Cactus Wilds pay as much as the Buffalo, up to 20x the stake.

The Stack N Sync mechanic requires the appearance of its own special symbol, showing the SNS logo. Whenever such a symbol appears on a reel, it will be filled with a stack of 15 to 60 symbols, all of the same type.

A respin is associated with each Stack N Sync symbol that lands on the reels. Get more such symbols while the respins are used, and the new stacks of symbols will use the same symbols as the other reels, for better odds of forming winning combinations.

The top symbol, with the Buffalo, lands stacked and it could end up taking over the entire reel. When that happens, a Stampede Reel is going to be activated, giving the player a multiplier of up to 100x, ready to be used on whatever combo of Buffalo that is formed and which reaches that point. Several Stampede Reels could be available, and they’re all added together, to decide the ultimate multiplier.

There is a bonus symbol as well, and depending on how many of them land on the reels, you can trigger one of the two features.

3 bonus symbols will be the trigger for 10 free spins. There are better chances of getting the Stack N Sync symbols to appear, and the Buffalo find it easier to land stacked.

4 bonus symbols will give you 10 Stampede Spins. The rounds you claim here will get only Skulls (blocker positions) and Buffalo symbols. You can get some of those Skulls replaced with Buffalo (up to 60 of them) whenever you get a Stack symbol on one of the reels. Incidentally, this also gives the player 1 extra free spin.

The potential of the game is very good, with a top jackpot of 10,000x potentially being delivered by it. You might not believe it when looking at the low number of lines and the rewards of up to 20x typically paid on each one, but there are up to 100x multipliers that could boost them as well.

The RTP of this slot machine is 96.36%, while its volatility is considered High.

Buffalo Stack N Sync gives us a decent selection of special features, and it has good top prizes as well, even though it might not look like it initially.