Charlie Chance is going to the Underworld, after entering some sort of deal with the She-Devil. Both are present among the game’s symbols, and they are designed to look like they’re part of a vintage animation film. In fact, the background image, where we see a cave version of the Underworld, is in black and white.

The symbols being used, range from the Wild logo and the She-Devil scatter, to images of Charlie Chance, a couple of demons, a 666 logo, and the four card suit icons (drawn in a Gothic style).

With more than 270 slot machines released so far, Play n GO has a lot to offer any player, and Charlie Chance: Xreelz is a great example of what they can do. It’s a sequel for another game of theirs, called In Hell To Pay. A lot of other great games are available in their collection, and a couple of titles that I’d mention would include Book of Dead, Golden Osiris, and Perfect Gems. 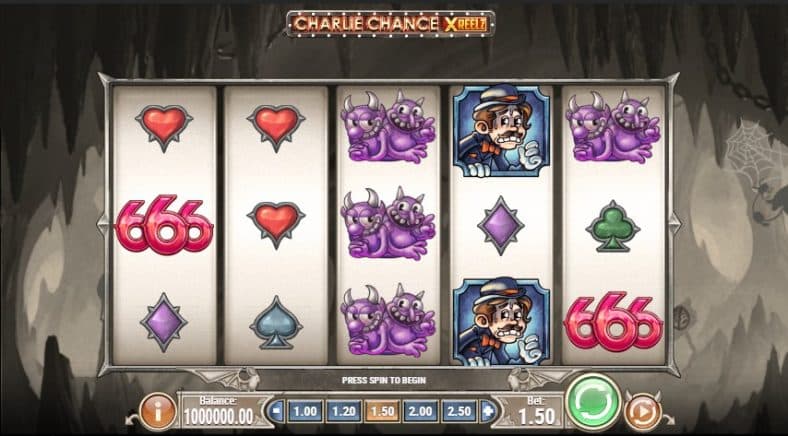 You will find the betting options listed at the bottom, in the middle. The values that you can scroll through, and choose to use, will have values between $0.10 and $100 per spin.

The game area has 5×3 reels, along with 243 ways to win. These are the equivalent of 243 regular paylines, covering every single possibility, which is a big point in their favor, as far as I’m concerned. Having 3 or more symbols of the same type, landing left to right from reel 1, will get you paid.

You probably noticed the Xreelz part of the game’s name. It has to do with a multiplier that is attached to each reel, and is activated whenever a wild symbol from that column is used in a new combination. The value of the multiplier is either 2x, 3x, or 5x.

As for the wild that will activate the Xreelz, it’s a symbol that you may use as a substitute, but you can also rely on it to get you paid directly. A combo of up to five wilds, will pay up to 20x the stake. Wilds are not going to replace scatters, only regular symbols.

Next, let’s take a look at the She-Devil, the symbol that is being used as a scatter. Depending on the number of symbols that land, you can get either re-spins or free spins.

With 2 scatters on the reels, the Second Chance Re-Spins are triggered. The scatters that landed, and their reels, will be sticky. The other reels re-spin. If you get an additional scatter, then that column is locked as well, and extra re-spins are triggered.

If you have 3 scattered She-Devils on the reels, either directly or as a result of the Second Chance re-spins, the free spins will trigger. Each round, there is a random reel chosen to have the Xreelz active, so it’s guaranteed that a multiplier will apply to wins formed with wilds in them. Depending on the number of triggering scatters, you always get 10 free spins, but the Xreelz multipliers range from 2x-5x, to 5x-8x, and even to 8x-25x.

I really like the potential that Charlie Chance has. This game can pay 20,000x the stake, and a lot of it has to do with the 25x multipliers that the free spins can bring. Though it’s highly volatile, the RTP should be as high as 96.25%, so it makes up for the risk somewhat.

Charlie Chance: Xreelz looks like another fun release from Play n GO, a slot machine that pays very well, looks great, and can be exciting to play once the right multipliers start kicking in.