It’s mostly about ice storms in Crystal Prince, but the game offers more than that, it also has a fantasy angle to it, thanks to the inclusion of its main character. You see the elf prince as the main symbol, and he’s accompanied by a mix of gemstones and snowflakes, all of them coming in the same colors (pink, blue, yellow, orange). Special symbols are used for the W wild and the Snowflake scatter.

A good enough slot machine, if we go by graphics alone, and with a different look since you’re seeing only part of the game area occupied by symbols. The rest are going to fill up through the reel expansion mechanic.

More than 70 slots have been launched by Quickspin so far, and this has happened over the last 8 years or so, so they’ve been doing alright as far as launch rate goes. They also have the habit of launching only high quality content, which on average is some of the best you will run across. Hammer of Vulcan, Ghost Glyph and Artemis vs Medusa are three of the other slots that they launched in 2020. 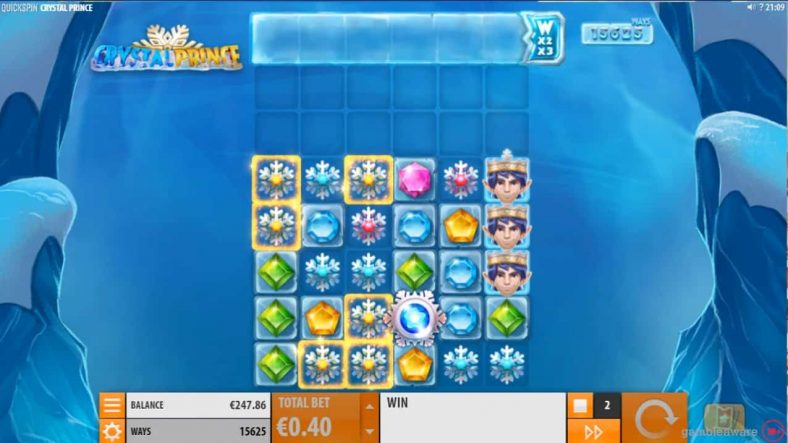 The range of the Crystal Prince seems to be quite similar in most slots, and while the starting value can change (it’s $0.20 here), the upper limit is almost always the same ($100).

Snowfall is a mechanic that allows the game area to expand, following a winning combination. Each new Snowfall does the same thing, it adds one row of symbols to the top. If new wins form, then the Snowfall keeps adding symbols and ways to win. As you keep doing this, you end up with up to 8 rows of symbols, and 262,144 ways.

The 8th row holds the Blizzard Seal, which you need to break by filling its row. Once this happens, the Blizzard Mode starts up. It adds up to 3 Wild Frost Multiplier Wilds, and it also locks all high value symbols, wilds and scatters. The symbols which are unlocked get removed, and then new ones come and can form additional wins.

Another Snowflake-style symbol, the scatter is elaborate, almost like a jewel. Having it land on 3 to 6 reels, will bring you a feature with 8 to 20 free games. Every single spin will receive up to 4 regular or multiplier wilds. The feature retriggers with as few as 2 scatters, but only 3 rounds will be given then.

Regular and multiplier wilds are used as substitutes when they appear, but the latter also boost the wins. They can have 2x or 3x multipliers, which can be combined through the multiplication of their values.

I’m quite happy with the 11,500x jackpot that Quickspin has allowed in Crystal Prince. It’s a big prize, for a slot with appropriate volatility (medium-high), and a 96.04% RTP. All in all, a good target for any player to aim towards.

Crystal Prince has certain mechanics inside, such as reel expansions, wild multipliers, respins, which are popular right now, and for good reason. It can also pay quite well, and if you’re the type of player that loves a good challenge, this one could work.