Crystal Quest: Deep Jungle is the start of a new series from Thunderkick, one which they’re continuing with Arcane Tower in the following months. The game has a fantasy feel to it, though at the same time we’re going into the jungle and finding all sorts of monsters there, from evil monkeys to snakes. Quite a bit of its design will revolve around crystals, which come in all sorts of forms, colors and sizes.

Some of the symbols which you’re going to find, include a W logo as the wild, a mystery symbol, a Treasure Chest scatter, Monkey, Snake, Triple Orange Crystals, Double Green Crystals, Single Blue Crystal, along with six smaller crystals, colored in pink, orange, yellow, green, blue and teal.

Thunderkick is still considered a fairly small company, but they’re not new to this market. Established in 2012, they’ve managed since then to launch about 50 slot machines, and they’re present at casinos from over three dozen countries. Some of the more popular titles from their collection, should include Beat the Beast Griffin’s Gold, along with the rest of the series, but also titles like Midas Golden Touch or Well of Wonders. 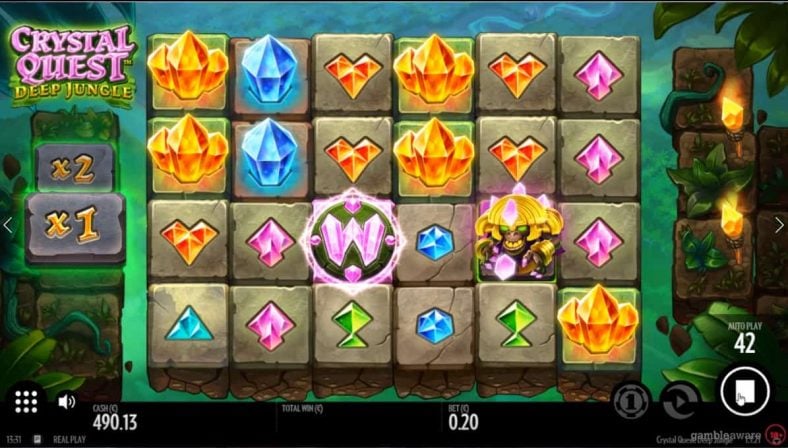 With Thunderkick’s slots, you generally just have to pick the amount which goes into the next spin. $0.10 is the minimum wager that you can use, while the highest you’re allowed to go is $100.

The game area gets you 6×4 reels, and there are 4096 ways to win present there. To form a new combo, get 3+ symbols to land left to right, on consecutive reels.

Forming a winning combination isn’t that difficult, though it’s not going to happen often. Still, once you get the ball rolling, the Avalanche feature can keep it going for a while, but that’s going to depend on your luck. Avalanches come after you form winning combinations, and they take out the symbols which got you paid, bringing others in and maybe getting you new wins. This feature keeps triggering like this, until no more new wins form.

One more advantage of the Avalanche, is that there is an increasing Multiplier that goes up by 1x with each new wave of symbols that’s coming. It will reset for the next spin though.

There is a Mystery feature as well, using a special symbol which will land on the reels and then it will transform into another regular symbol, with all its instances.

A crystal-based W logo is the wild, a symbol which may be used as a substitute, but only for the regular symbols.

Finally, there is the Treasure Chest, a scatter which is needed on 3 to 6 reels, in order to trigger 12 to 21 free spins. Retriggering this feature is possible with 2 to 6 scatters then, getting you 3 to 11 extra spins.

Among the special features of the free games, is the exploding nature of the wild, when the round has no wins in it. The explosion of that one wild will remove symbols in a horizontal and vertical line, starting from its position. That gets the Avalanche going, and so it’s sort of like a second chance.

Speaking of the Avalanche, its multiplier will go only up, it will not reset between the free spins.

Crystal Quest: Deep Jungle looks like a game that’s fun to play, with plenty of features to explore in this one, and there are the right top payouts to go after as well. I love a good game with unlimited multipliers, and this one delivers just that.