The Gernan U-boats had a huge impact on the naval battles of World War 2, and they were a focus of several movies in the decades that followed. Das Boot was one of those movies, which was released in 1981, in Germany. Das xBoot appears to be a branded release that is based on this movie, and it’s showing off a German submarine in the background, serving as support for 6 reels that range from 2 to 5 symbols.

On those reels, you will discover the Royals in the low paying icons, and then images of the submarine’s crew, from cook to captain. Medals, Sonars, and Mines, are being used as feature symbols.

This game was created by Nolimit City, and it’s a slot machine that is as interesting as the rest of their collection. With more than 50 slot machines on offer, the developer has quite a few other notable titles, including recent ones like Infectious 5 or Mental. 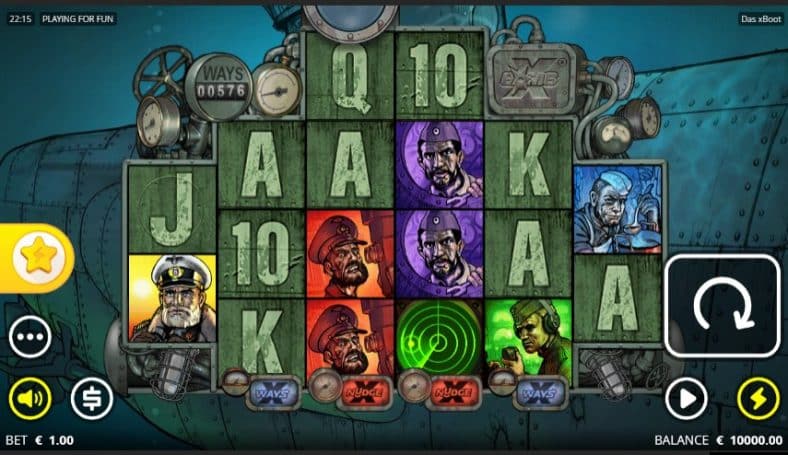 You click on the Dollar sign button, to open up a menu, listing all available bet values. The options listed there have a range between $0.25 and $100.

It’s a game area with 6 reels, which offer 2-3-4-4-3-2 symbols. A total of 576 ways to win are delivered in this manner, but through certain mechanics it’s possible to give that number a boost, with up to 75,712 ways available at most. Provided that you get at least 3 matching symbols to appear left to right, on adjacent reels, you will form combinations.

If you want to get more ways to win, that’s possible through an xWays symbol, that can show up on the 2nd and 5th reels. It picks a random symbol to show, and will give you 2 or 3 of those symbols in a single spot. You can get more symbols per reel this way, and this can give a boost to the number of ways to win.

Wilds are going to land stacked, but they have the ability to nudge in place, so they will end up taking over the entire reel. You can get them on the 3rd and 4th reels. As they get nudged, for each such action taken, the multiplier increases by 1x (up to 3x multipliers can be applied by these wilds, and their values are added if you get them on both reels, with up to 6x possible in total).

There is also the xBomb Multiplier Wild. Upon landing, it explodes the symbols that aren’t used for wins, and others will be brought in to hopefully create some new wins. There is also a boost to the multiplier, by 1x, when the explosion occurs.

You can get 8 Silent Hunter or 8 Wolf Pack Free Spins when the Sonar Bonus symbols are available 3 or 4 times on the middle four reels, respectively.

Das xBoot is going to have excellent potential, with its top jackpot going up to 55,200x the stake. That’s just incredible, and even though the game is going to have very high volatility because of it, it’s definitely possible to win that much. In fact, a player has already claimed that top jackpot, in the first few weeks after the slot was released.

Das xBoot has the superb payout potential that would motivate a lot of players, and there is an interesting story and complex features to explore as well.