It’s a Megaways game, but it’s also a classic where the theme is concerned. Dazzle Me Megaways is a modern version of an existing NetEnt slot machine, which delivers exciting mechanics and big payouts. It’s been brought into the modern age visually as well, and while you get pretty much the same symbols on its reels, the quality of the design is a lot better.

Speaking of symbols, those range from the Free Spins logo, to the Diamond Wild, and regulars like the Lucky 7, the Golden Bell, Red Heart, Four-leaf Clover, and the gemstones colored in orange, bright pink, green, purple, a more muted pink, and teal.

NetEnt’s the company that’s bringing us Dazzle Me Megaways, and it’s a developer with a lot of history in the online gambling space. They’ve been at it for more than two decades, being one of the original creators of online casino games. These days, they have an impressive collection of slot machines, along with other casino games, and even a live dealer table category that’s thriving. 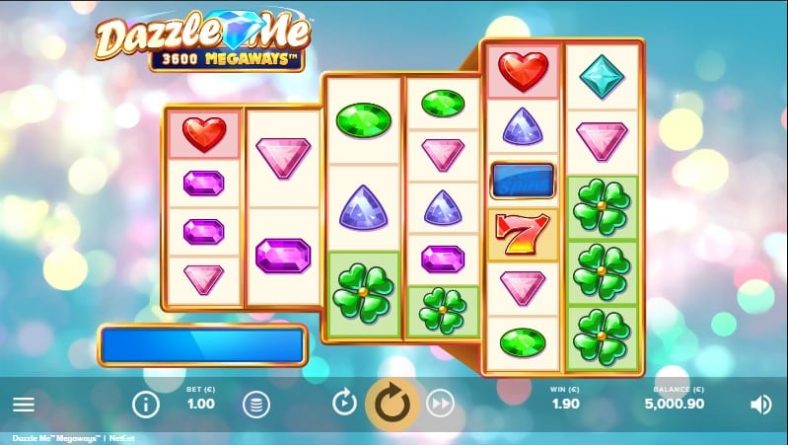 You’re going to be required to pick the total wager, to go into the next round. It’s starting from $0.10, and could go as high as $50 per spin. The game area stays the same, regardless of wager size, it’s just the payouts that change.

As for the type of setup that’s employed here, the slot offers an unusual system, where the 6 reels are grouped in 3 sets of 2. The reels will have a different range for the number of symbols that could land, with the first two getting the smallest one, while the last two get the most. At least 2 symbols appear on these reels, but they could go as high as 9 for the latter reels. Up to 99,225 ways to win could be available for a single round.

The Avalanche is a tumble/cascade mechanic, quite common in recent years, used to remove the symbols involved in winning combinations, in order to give players a second chance at creating new wins. Avalanches continue to trigger, if the new symbols keep forming new combinations each time.

One of the biggest features present in this game, the Dazzling Wild Reels are only randomly triggered for the most part, during the paid spins. This will change during free spins, but that feature is not that easy to come by.

When triggered, the game gives you 1 to 3 wild reels, selected from the last 5 columns (2-6). During paid spins, these get removed through Avalanches, and the reels may get regular symbols as well then.

The Diamond Wilds, which you can get at random or during regular spins, will act as substitutes that may be used alongside any regular symbols. They can’t be used to trigger free spins.

What does work to trigger the free spins, is having 4 to 6 scatter symbols with the Free Spins logo. In exchange, you receive 8 to 16 free spins, where you’re guaranteed 1+ Dazzling Wild Reels each round. Even if removed through Avalanches, the wilds get replaced with other wilds in this case. As for the number of wilds that will land per reel, it depends on the number of times that one was part of a combo, and there is a counter at the top of each column, to keep track.

You’re looking at a game that has only medium volatility, but it’s capable of great things during the free spins. It’s capped at 20,000x the stake, but that’s more than enough for a slot that’s not as risky as many of the other Megaways titles. The RTP range goes up to 96.10%.

Dazzle Me Megaways looks like a great option, not just for the fans of the original Dazzle Me, but for those that love Megaways slots in general.