Though it’s a superhero themed slot machine, Diamond Force lack a lot of the excitement that would come through in other games that are similar in story. This is no branded game, and the developer didn’t bother much with the story, so you get four main characters called Blue Hero, Green Hero, Red Hero and Purple Hero. The rest of the symbols are just as unimaginative, using the basic Royals. 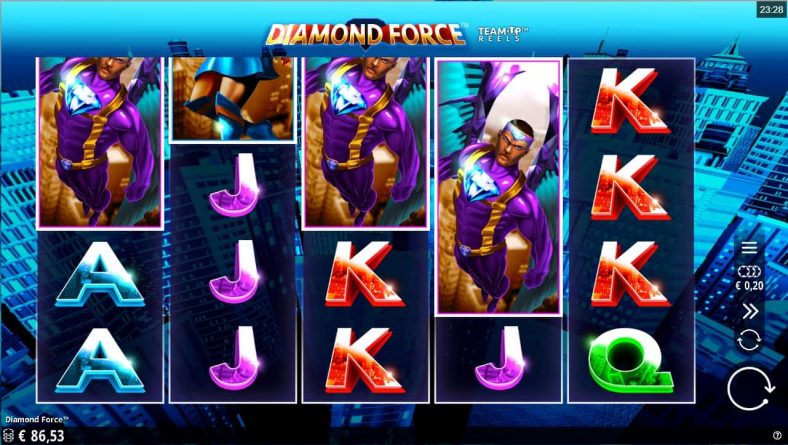 You’re getting a Crazy Tooth Studio release here, and as is the case with plenty of others, it’s an exclusive game that they’re offering at Microgaming casinos. It’s designed specifically for them, and it allows small companies like this one to reach a huge audience, across hundreds of casinos, being promoted by Microgaming as they would with a game of their own.

Not a game that will allow for big bets, Diamond Force requires anywhere from $0.10 to $10 wagered on each round, in order to get the action going. In exchange, it delivers all its ways to win.

The setup of the game involves 5×4 reels, on which you will find 1024 ways to win. To be appreciated here, is the fact that your wins of 3+ matching symbols can start from any reel, not just from the leftmost one. The three symbols that you need on consecutive reels, can even be on the middle three columns.

Besides the way that the game creates its wins, via ways to win and without the requirement of a certain reel as a starting point, it will also incorporate a couple of features that look like they could be interesting.

Before we get to the stuff that’s new, let’s check out the game’s wild symbol though, which we see on the reels 1 or 5, taking the form of a Diamond. From there, you get to use it as a replacement symbol, which can be combined with regular symbols only.

And now, we get to the features which look a bit more unusual. For one, there is a Team-Up Reels mechanic here, which involves stacked Hero symbols that can cover full reels. When this happens on three reels at the same time, with matching or different heroes, you get a feature to trigger. The Team-Up will take the triggering symbols to a different game area. There are modifiers applied by each of the four types of heroes, going up to 5x. Depending on which of those symbols appear during the following round, you get a cash prize that’s based on that modifier.

There are also free spins here, and once again they’re inspired by the Team-Up mechanic. You need a minimum of two stacked superheroes to appear, while the fifth reel has a bonus symbol, which is also stacked. You get 3 rounds in this mode, but there is the possibility to add more. As in the base game, you get modifiers and cash prizes from the superheroes that land in view.

A top jackpot of up to 13,175x, now that’s something that you don’t see often in Microgaming’s collection, and since this game is not designed directly by them, I’m not sure if it classifies as one of theirs completely. Nonetheless, this is a game that you only find at their casinos, and if you like high volatility slot machines, then Diamond Force will provide you with an excellent reason to try it out.

Perhaps even more important, is that the game is expected to return to players an average of 96.53% of what’s wagered in it, which is quite a bit better than what we see from other games.

Diamond Force has some interesting new mechanics to show, along with big top payouts and excellent RTP. What it doesn’t give you, is a good story.