There will be certain things about Diamond Inferno that will feel special and interesting, but I wouldn’t count on the theme to be one of them. It’s a classic slot with the appropriate symbols, along with a fiery background which also is incredibly common in such games. The ability of the reels to expand adds to the unique side of the game, even as you’re looking on its reels at a mix of symbols that go from the boring low value Royals, to the Dice, Dollar Sign, Bar logos, Lucky 7s, Stars, Wilds and Diamonds. 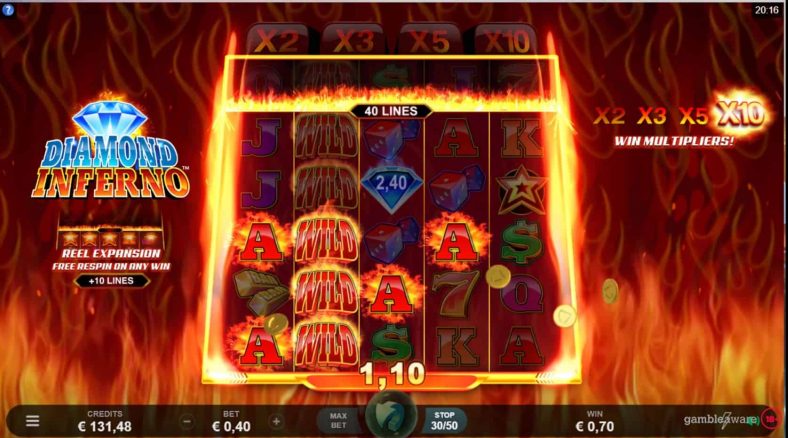 Triple Edge Studios is the developer that actually worked on Diamond Inferno, but they’ve done it as part of their exclusive deal with Microgaming. The game will be available exclusively on Microgaming’s platform, and the company will push it as if it was one of its own.

They’ve been doing this with the games from several small companies, which provide them with exclusive content, and there is an interesting mix of slot machines being released on their platform as a result.

You’re able to pick the value of the bet directly, and there will be no question about the slot’s number of active lines. You just select the amount, whose range will be between $0.20 and $20, and that’s it.

You start things off with 5×3 reels and 20 lines, but there are respins with reel expansions, where the game area can reach a size of up to 5×6 reels, with 50 paylines. The way that you actually form combinations is considered standard, with 3+ regular symbols arranged left to right on a line.

The big feature of Diamond Inferno appears to revolve around the Free Respins, which will trigger frequently, or at least about as often as you can get a win. On any winning round, there will be a free respin triggered,  where the game zone will expand by one row and 10 lines. Get another win then, and the respins continue. Eventually, you can have 3 additional rows and 30 more lines, compared with the base game.

Once you’ve unlocked the full 5×6 reels, the game will switch things up, and start boosting the multiplier for any respins that follow. You can get a boost to 2x, 3x, 5x and then to 10x.

Scattered Diamonds will bring you prizes, but the value will change depending on the row that they show up on. The best rewards will be coming from row 6, when the reels are fully expanded, and the Diamond will pay 20x the stake from there. The smallest reward comes on row 1, where the Diamond pays only 1x the stake.

One more feature is available, the flaming Wild logo, which you get to use as a substitute. It may only land on the middle three reels.

I like the potential of Diamond Inferno, a game that can pay up to 11,750x the stake in a single round. Not difficult to believe, considering the respins and multipliers that can just pile on, one after the other. Other notable elements would be the RTP of 96.19% and the Medium volatility, the latter being great for a slot with the kind of payouts that this game can offer.

Diamond Inferno looks like it could be a decent way to spend some time, for the players looking for games with big rewards, but only moderate risk. The classic theme might not be a favorite for many, but the rest of the game is decent.