If you have a soft spot for the 80s, and you remember the period’s disco scene fondly, Disco Danny could very well be a fun game for you. It’s got a classic vibe here, and the layout to go with it, so it fits the era well enough. This being a game from NetEnt, it has the excellent graphics to go with the theme.

As far as its symbols go, there are only a couple that could be considered themed, mentioning here the main character, Danny, along with a disco ball, a pair of roller skates and a series of classics (the three variants of the BAR logo and a Lucky 7). An Elvis-like version of Danny is present as well, in addition to the regular one.

A company which has been creating awesome games since the mid 90s, it’s one of the older developers of online slot machines around today, and in the top 3 as far as popularity goes. They’re easily found at most casinos, and the quality of their slot machines is always very high. 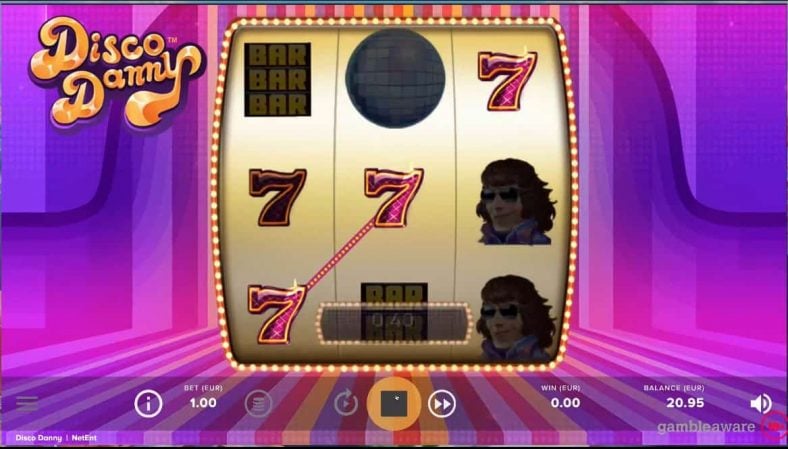 It’s not a game that will require a big investment on your part. $0.10 is the lowest available bet option, while $250 is the highest, so the high rollers are accommodated as well.

You get a fairly small game area, 3×3 reels being a classic setup, so it’s not a surprise that only 5 active lines are available there. A win will come as a result of three matching symbols appearing on the same line, and taking over all available positions.

It’s a tough game to play, mostly because without the bonus feature you don’t get enough excitement and prizes out of it. About 1 in 7 rounds is a winner, which is a very low hit frequency, and the volatility is high as well.

One of the game’s scatters, the Gold Disco Ball shows up and pays you, just for being present once in view.

The free spins will actually look more like a respin feature. The reels spin, giving you either blank positions or Gold Disco Balls. You start with 3 respins, and the number resets whenever a new symbol appears, adding a prize of up to 50x the stake per symbol as well.

If you fill the reels, you get paid for that level, and then you advance to the next one. A total of 5 levels exist, with multipliers ranging from 1x to 10x, to be applied to the prizes mentioned by the Gold Disco Balls.

The big prize of Disco Danny will reach 3,333x the stake, a pretty good reward normally, though not as interesting in a slot machine whose hit frequency is very low, and the volatility high. The RTP may be right, at 96.04%, but I don’t like the experience this game offers and the risk/reward ratio.

Disco Danny could be an appealing choice for someone that likes the 80s and the classic setup, but I’m not much of a fan of its choice of volatility, hit frequency and even potential. A 3,333x the stake jackpot could work for plenty of slots, but this one feels a bit too punishing and would need a better motivator.