Electric Avenue appears to borrow quite a bit from the 80s, in terms of theme and design implementation. The neon-style graphics will rely on images that might remind you of a tropical beach, though in a more urban setting. Miami Beach appears to be the source of inspiration, along with the 80s in general.

You can also see this in the symbols shown on the reels, which include a DeLorean car, Wild Wheels, Boom Box, Polaroids, Shoes, Rubik cube, sunglasses or soda cans. 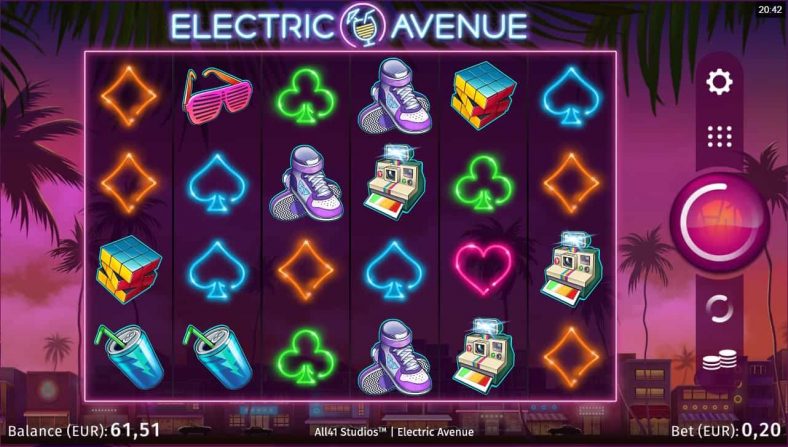 Microgaming and All41 Studios have teamed up for this one, so the game will benefit from all the exposure associated with the bigger company, even though most of the work has come from the small studio that they partnered with.

The number of slot machines that Microgaming offers has exploded over the last year or so, ever since they started doing these partnerships, but the quality can be a bit hit and miss. Some are great, others not so much.

Spin those 6 reels and get a potentially huge number of combinations, all in exchange of a bet as small as $0.20. If you can afford it, then you may go as high as $30, with a spin’s wager.

It’s not a typical game setup and set of features, but it’s not terribly complicated either. You spin 6×4 reels, which have 4096 ways to win active.

The Wild symbol, a very common feature symbol that you get from most slots, is active and quite powerful in Electric Avenue. You don’t see it landing on all reels, only the middle four ones, but even so, it expands on them and it contributes to all ways to win, with a single symbol position (it reduces the number of ways to win, since you get 1 instead of 4 there). At the same time, a multiplier of 2x to 5x can come with one or two of the wilds that show up, to make up for its shortcomings, but that’s not guaranteed.

In another tribute to the 80s and the iconic films of the time, we get a DeLorean as a scatter symbol. If it lands on 3 to 6 reels, with just as many symbols, it first pays a prize of up to 20x the stake, and then also gets you free spins. It’s a choice actually, between two variants, each one with its own extra feature.

7 Electric Free Games can trigger, where the Power Wilds are sticky and serving as the major feature. A randomly chosen symbol is turned into this sticky wild, whenever it lands on the reels. 3 extra rounds get added, if a full wild reel is obtained.

10 Neon Free Games will be the second variant, also exciting. Here, a Wild Wheel symbol can show up on the middle four reels, and on average it does so in about 50% of the free games. Multipliers ranging from 11x to 55x are going to result from the Wheel’s spin.

In a game where up to 55x multipliers can be applied, big wins are pretty much guaranteed. In this particular case, we get rewards of up to 6,833x the stake, which is adequate, but not impressive. RTP wise, with its 95.49%, Electric Avenue disappoints.

Electric Avenue does a couple of things right, and it can be enjoyable and exciting to play. I also see some downsides there though, like its below average RTP or the expanding wilds that are considered single symbols.