A hero’s adventure, and the siege of a castle, you get two themes in one with Fortress Charge, which comes from Microgaming and Crazy Tooth Studio. You will notice that the game area is shaped like a fortress with three levels. As the hero lands in the first position one row, he starts advancing and meeting various enemies and objects, which he either defeats, or gets defeated by. The name of this new game mechanic is Reel Quest.

As symbols, you will encounter the five types of heroes (dragons, beasts, elves, dwarfs, knight), along with the five villains (boulder, snake, spikes, ogres, scorpions) and objects (magic wand, metal or wood shield, spears and potions). 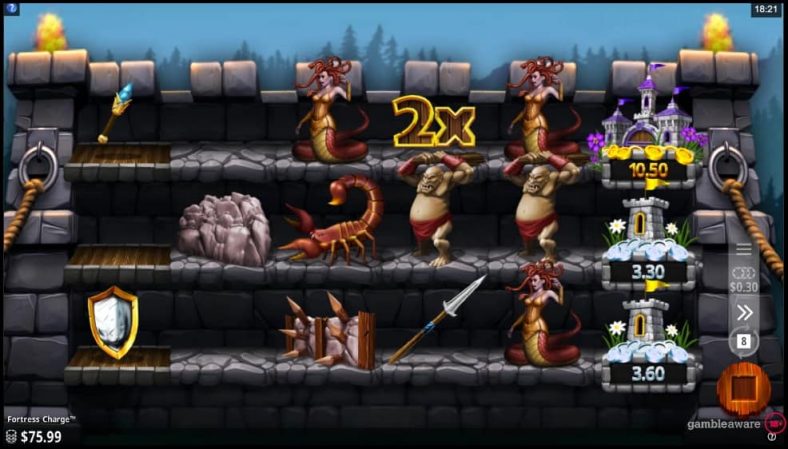 It’s a game that you will find at Microgaming casinos, being exclusive to their platform. The actual developer is a smaller studio that they partner with, called Crazy Tooth. It’s an interesting partnership, and one that has produced several decent games already.

The way to get the game going is by selecting a bet, and then clicking Spin. It requires a wager of $0.10 to $15 on each spin.

In exchange, you’re going to get only 3 active lines on the 5 reels. Each of the three rows is a line that the hero can advance on. More on how the game works in the features section. It might take a while getting used to this new Reel Quest mechanic, but it’s not going to require any special knowledge to get started, you just need to click on the Spin button.

The new Reel Quest mechanic allows you to go on adventures, with up to three different characters each round. In order to get a win, what you need first, is for a Hero symbol to appear on reel 1. It will then move on its row, towards the right side, trying to reach a Fortress and the prize mentioned on it.

Even as it advances, it gets you paid by fighting various other characters and obstacles. Each hero has its strong and weak points, so some of the enemies he meets will defeat him, while others will be easy to take down. You get to use various objects as well, against said enemies, and once again, each one is better against certain types of targets.

It’s not a game that pays often, and even then, it’s likely that the hero will be defeated along the way, making it quite difficult to reach the Fortress and get the bigger payout. A hit frequency of only 12.32% is mentioned, which means that you get some kind of prize only in 1 out of every 8 spins, on average.

Some help can come along the way, with fireballs dropping from the sky and removing enemies from the reels. This is random though.

When it comes to rewards, Fortress Charge does very well, and promises to pay as much as 16,000x total stake. This is obviously a game with very high volatility, as evidenced by its low hit frequency of just 12.32%. Players that are getting into it will know what to expect though. Luckily, the developer also made sure to use a good RTP, of 96.45%, so it might be risky to play, but not unfair.

Fortress Charge gives us a new type of game mechanic that we can use, and it proposes a system called Reel Quest, where we get to go on an adventure. It’s fun because of that, though if you’re not into risky slot machines, the high volatility of this one might keep you away.