It doesn’t look like the usual game from NetEnt, and this extends further than just its 3×3 reels and the new INFINIREELS mechanic. It’s also a game which places the action in a treasure filled cave, with the background showing us piles of gold coins and other valuables.

There are several main symbols on the reels which appear to be showing the so-called gods of gold, along with other lower value symbols that have different gemstones, colored in dark red, purple or blue. It’s a good look for it, a bit unusual perhaps, but it works well enough. 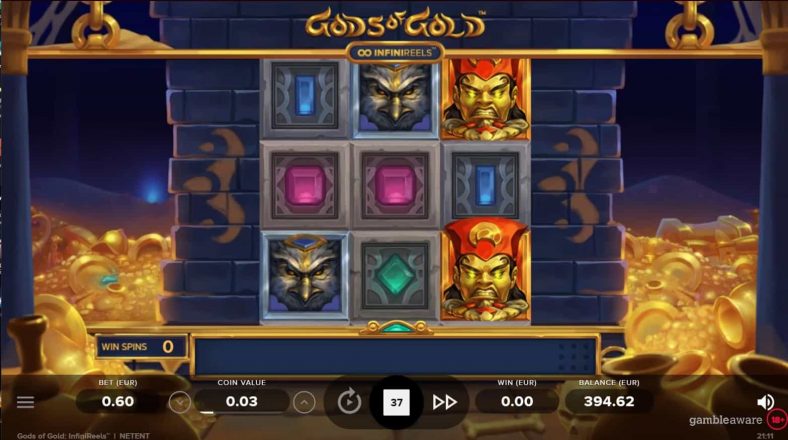 It’s a developer that doesn’t need a big introduction, as NetEnt is likely well known by most players by now. A top 3 developer in an industry that has dozens of big names already, it’s a Swedish company that has offered some of the highest quality slot machines around, and they show no sign of slowing down.

You get to play this game with 20 coins, and in exchange you’re offered all potential ways to win that become available. You change just the coin denomination, the range available for it being $0.01 to $10, and that way you can spend between $0.20 and $200 each round.

It’s unusual, sure, but the system works on its own, it doesn’t require your knowledge of its system in order to function properly. Suffice it to say, that it’s a slot with ways to win, spread across 3×3 reels initially, but with the possibility to expand them indefinitely. Starting with 27 ways to win, the game has the ability to expand the game area as you’re creating wins, multiplying the number of ways by 3 with each new column that gets added.

The INFINIREELS system, with its unlimited number of ways to win, is the main driving point behind this slot machine. It does increase the game’s potential, but there is a limit to how high that can go. The number of ways might be unlimited, but at some point you still hit a ceiling when it comes to how much you can win. Also, the winning combinations formed here have up to 10 symbols in them, and a minimum of 3 are required.

As the round ends, there is a chance that a Re-Spin will trigger at random.

Multi-Slams can also trigger during winning rounds, and if they do, they add up to 3 reels to the game area, guaranteeing you additional wins.

With the Sun scatters appearing at least three times somewhere on the reels, you get 10 or more Win Spins out of them. As the name indicates, the free spins are guaranteed to pay you, so it’s an especially interesting feature to trigger.

There will be wilds in the game as well, and they show up once you start expanding the game area, so only from the 4th reel going forward.

While the game might have the potential to get a number of ways to win which goes into the billions, the developer can’t afford to just let it pay whatever it can, in the eventuality that someone actually gets extremely lucky. There is a very good top payout of 25,000x the stake, that the game is limited to, which is excellent for a slot machine with medium-high volatility. I’m also happy with its RTP, of 96.21%.

Gods of Gold INFINIREELS should be able to deliver enough interesting features and unique gameplay, that you will want to play it for a bit, even if you’re not a fan of higher volatility content. Recommended overall, it’s a good slot machine.