The old theme of the gold mine and its piles of nuggets, that’s what All41 Studios chose to display on the reels of Gold Collector. The gold miner with the white beard, showing us his age, is the main character once again in such a slot machine. It appears that gold mining in the Wild West was not a job for the young, at least if we go by these slots. The entrance into the mine is shown behind the transparent reels, with a railroad track leading into it.

We see on the reels a series of Royals, gold-made and rather boring to look at, with the themed images being used in top-paying symbols with the Miner, a Gold Cart, an Oil Lamp, a Pickaxe and a Shovel. There will be a couple of feature symbols also, with the logo and the dynamite sticks taking on those roles.

Among the many small developers working for Microgaming, and designing exclusive games for their platform, All41 Studios stands out. Some of the notable titles that we’ve seen them launch, include several Megaways slots (Forgotten Island or Shamrock Holmes), along with Book of Atem: WowPot, which features progressive jackpots that will go into the 8-figures range. 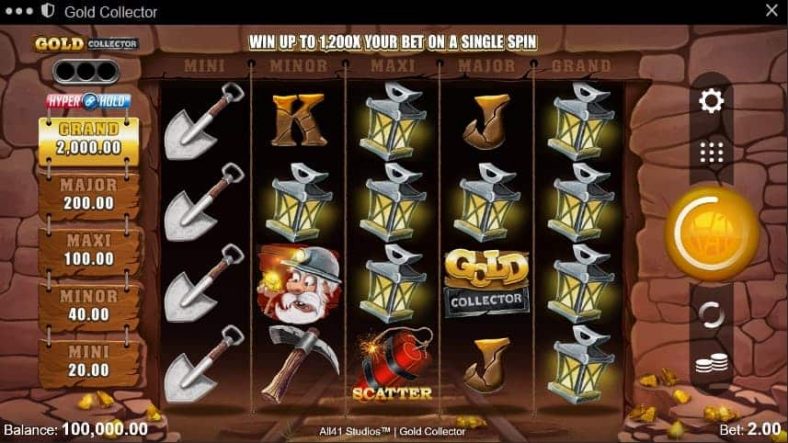 It’s not a complicated game to play. $0.10 is enough to activate the 50 lines, but for maximum results, you want to get as close as possible to the $100 which is the upper limit allowed for the bets.

Using 5×4 reels, so a bigger game area than in the standard slot machine, Gold Collector will have a total of 50 active lines for you to use. Land enough symbols (3+) of the same type on a line, and left to right, to get paid.

Most symbols will get help from the wild symbol, when everything lines up properly, to allow you to form new combinations. A wild can be seen on the reels 2, 3 or 4, if it does show up. It’s only able to replace regular symbols, not scatters.

HyperHold is one of the major features of the game, even though it’s quite simple to use. It requires a minimum of 3 Coin scatters in view, so that it can trigger. The difference from the other games which use this feature, is that only triggering reels are activated. They get new Coins or blank positions, and you try to fill the reels. Each reel filled will have a different jackpot to give you, so there are 5 in total, going from 10x to 1,000x the stake (Grand Jackpot). Each coin has a regular prize to pay as well. You start with 3 respins, and the number resets whenever new Coins land.

The third feature will be the free spins. 8 rounds are triggered initially, but they can be retriggered as well. You just need 3 Dynamite scatters on the middle three columns.

It’s not going to be a slot machine that will make you rich, but 1,200x the stake is not a bad return from a game with medium volatility. RTP is good enough as well, 96.40%, but there is the possibility of a lower value to be selected by the casino, so double check to see if they’re using the default.

Gold Collector does some things differently, particularly when it comes to the HyperHold respins, and that could be enough to make some people curious about it. It’s not that special otherwise, but it’s not the type of slot to run away from either.