Golden Glyph 2 will deliver a large game area, with 7×7 symbols and a design style that borrows heavily from Ancient Egypt. The desert and one of the region’s ancient temples is shown as part of the background, while the Cluster Pays will form with help from about 7 regular symbols, in addition to the feature triggers.

Several symbols appear to be based on hieroglyphs, showing images related to water, an Eye, the Ankh, a Snake, but also higher value icons with the Pharaoh, Cleopatra, and Horus. Bonus Pyramids, the Golden Glyph, and a Winged Wild, these will be the feature symbols.

Quickspin, the developer behind Golden Glyph 2, has a long list of excellent slot machines that you can check out. In addition to the original Golden Glyph, you will also find games like Vampire Senpai, Wins of Fortune, Sakura Fortune, and Loco the Monkey, to give you just a few examples with different themes. 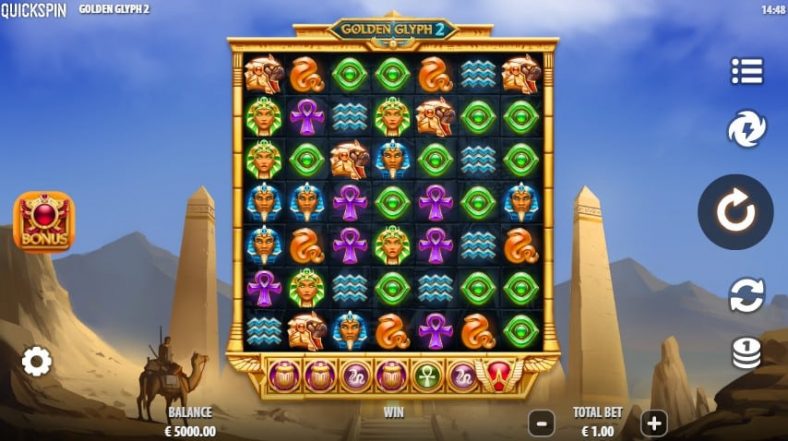 Look for the Total Bet section, it will allow you to pick the amount that activates the next round. The range for it is $0.20 to $100.

In exchange, you will find a game area with 7×7 reels, meaning that there will be a lot of different symbols. They will use a Cluster Pays system, so you need a group of 5+ matching symbols to get paid. These symbols don’t have to be on certain lines or reels, but they do need to be next to each other (horizontally or vertically touching).

Tumbling Reels will be among the most common features available inside. It triggers whenever a cluster forms, and it is used to remove the symbols from it, and to bring others in. This can lead to more winning clusters, and then to additional Tumbles.

Within the game area occupied by a removed winning cluster, you will notice a Power Glyph symbol appearing. If it is part of a win, then a Power-Up will be activated by it. Several possible features can be obtained this way:

You can access the Golden Free Spins when you have 3 Bonus Pyramids in view on the reels. You get 7 rounds initially, and you can retrigger it with 5 more spins. The Golden Glyph wilds are sticky, and you start with one on the reels. These will move around between rounds. Have these Golden Glyph wilds participate in clusters, and their multiplier will go up each time. Up to 50x wild multipliers could be achieved in time.

A regular W wild is also part of the reels, and it can be used as a simple substitute. Gigantic Wilds are also possible, and they can occupy 2×3 positions.

It’s a game with big potential, with rewards of up to 29,500x the stake paid at most. Medium to high volatility characterizes it, and that’s better than expected for that kind of jackpot. RTP is also fine, and long-term it’s expected to be 96.09%.

Golden Glyph 2 looks like one of the better options available to players that prefer taking big risks, in exchange for a chance at large rewards. There is a lot going on inside, so it works well for those that get bored easily otherwise.