Hell’s Kitchen is a TV game show, with both British and American versions. The common denominator for the two, is Gordon Ramsay, a British chef that has achieved world recognition not just for his great cooking, but for his no-bullshit attitude as well. While there are elements that we’re seeing borrowed from his show, and we do see the man as a symbol, there isn’t enough of his brand in the slot’s design. What’s left, is for us to listen to his rants while we play, which may just be enough for most players.

As for the design, it’s mostly average-looking, and it will give us a range of food-related images in the upper icons, and a mix of red hot Royals in the bottom ones. Burgers, meats, cocktails and sweets, these four provide the player with the better rewards, being the best regular symbols you can get. Ramsay acts as the scatter, while the HK logo is the wild.

A giant like NetEnt needs no introduction, but just in case you haven’t been playing slots online for too long, you should know that this is a top 3 creator of such games. Hundreds of slot machines are in their collection right now, and even their older releases will have above average graphics. It’s actually better than what you’re seeing in Hell’s Kitchen, so if anything, this slot is not their best work. 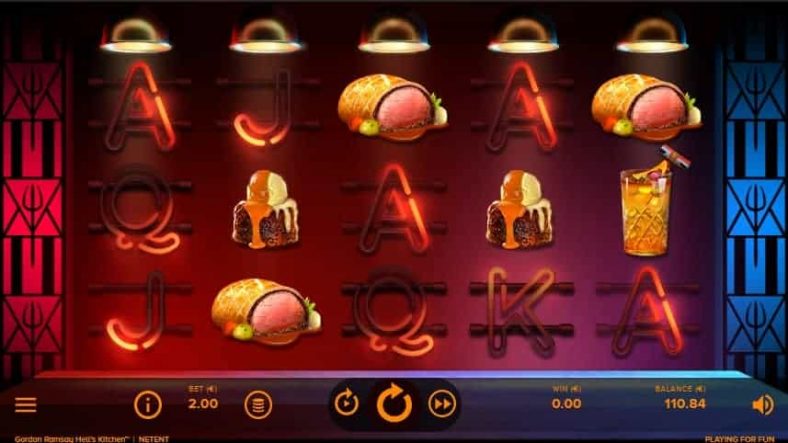 A very long list of bet values is shown on a separate screen, where you can pick the one that you can afford. $0.20 is the minimum, while $400 per spin is the maximum allowed.

Things haven’t changed too much, compared to other slots, and to get paid you still need a certain number of matching regulars (3, 4 or 5), landing left to right on a line. It’s a slot which has 5×3 reels, with 20 paylines.

One of the two special feature symbols, the HK Wild is obviously going to be the substitute. You may use it when it lands alongside regular symbols on active lines, which allows it to form new wins. It’s not a substitute for any scatter, only for regular symbols.

At random, a feature called Ramsay’s Wilds may add 5 to 7 extra wilds to the game area.

There is a free spins mode, called Team Challenge, which you can reach by getting 3 or 4 Ramsay scatters in view (they don’t land on reel 3). You either get 10 or 15 rounds, respectively.

You play with two sets of reels at this point, each one representing another team from the show. It’s the Red vs the Blue team, and you have to pick one of them. As you progress through the spins, each zone can get random features to apply. 1 to 3 of these modifiers are active each round, and they go to the two sides at random. It could be a 2x-3x multiplier, or a bonus feature.

The bonus feature is called Team Wilds, and it adds 3-8 extra wilds to the game area.

The multipliers are added up, if they show up on the reels of the same team, so wins can get a boost of up to 5x.

Once the free spins are over, the set of reels which brought the bigger wins will be declared the winner. If your team was the one to win the free spins,  you get access to Gordon’s Bonus Game, and you may get a multiplier to apply to collected prizes.

You get up to 1,000x the stake, from a slot with low volatility and a 96.07% RTP. Clearly, it’s been built to appeal to the masses, not to veteran gamblers.

Hell’s Kitchen looks fine for a branded slot machine, but at the same time I think they could’ve done better design wise. It’s a good game for casual players which love the show, but not for veterans.