Peter and Sons is coming out with their own version of a Viking-themed slot machine, which they’ve called Hammer of Gods. It’s obviously a very common theme, and we’ve seen a lot of great designs that use it over the years. However, Hammer of Gods manages to do a very good job, in delivering a cartoon-style design that is funny as well, using almost caricature-like drawings of its characters.

Taking us onboard a Viking longboat that’s filled with loot, and which funnily enough sits on grass in the middle of a mountain range, the slot offers several good symbols. The lesser ones still have the six Royals that most slots seem to incorporate, from the 9 to the A. The premium symbols include five Viking characters. Major features come through the Shield scatter and the Hammer Wild.

Like many of the slot machines we’re seeing from Yggdrasil right now, Hammer of Gods is actually designed by a partner of theirs, called Peter and Sons. A few other titles which have come out from this partnership in the past, include Robin: Nottingham Raiders and Cauldron. 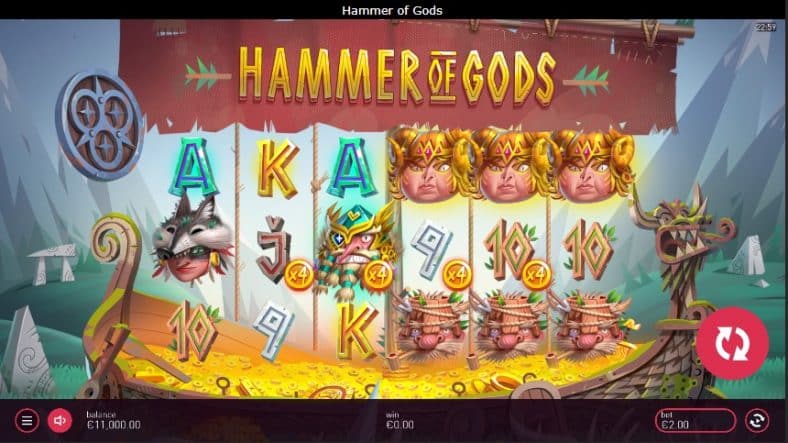 Spending anywhere from $0.10 to $20 will let you play this game. Pick whatever bet value you want, the entire game area becomes active.

Its game area is actually not easily found elsewhere, as they only have 3 symbols for each of the 6 reels that are being used. That allows for 729 ways to win, with just as many combinations possible each spin. To win a prize, you need at least 3 symbols to form a combo, by landing from the left to the right, on adjacent reels.

A regular wild is available for the base game, Thor’s Hammer being colored in blue. It’s a substitute, which also has a golden version, used during free spins.

Gaining access to the free spins feature is possible when you get 3 or more Shield scatters to appear. This also results in a prize being paid, and it could be as high as 500x the stake for 6 of these symbols.

You can win 15 free spins this way, where you now have access to Way multipliers, a way for the game to give the ways to win a boost by making individual symbols count as several (a way multiplier appears next to individual symbols, boosting their number by 2x to 4x). You can even have several multipliers boosting each other, if they appear in the same combo.

During this particular feature, you will have access to special wilds, taking the form of Thor’s Hammer. You can collect 3 of these, to get a re-spin where all the wilds you’ve gained are placed back in the game area, at the same time.

Overall, I think that Hammer of Gods has what it takes to make the players give it a chance, provided that they’re OK with the increased volatility that’s expected of it. Paying 51,000x the stake is possible here only because of the many losses that most players will have. Still, the 96.06% RTP says that it’s a fair option, despite the risk.

Hammer of Gods is another exciting release from Yggdrasil Gaming and Peter and Sons, a slot machine that can pay a huge top prize, and it will do it through Way Multipliers that can make the free spins hugely profitable to play through.