Hell’s Hogs, despite its name, is not a slot machine that takes us to the underworld. In this particular case, the theme revolves around three motorcycle riders, bikers that just so happen to be pigs. They look fierce as well, with leather outfits, sunglasses, and sharp teeth. The location is on Route 76, in the middle of the desert.

There is a list of symbols that starts off with card suits, colored in red or blue and with metallic backgrounds. The fire wheel is going to be next, along with the jukebox, and the top-paying game logo. Of course, some feature symbols were also deployed, and here I’d mention the three pigs, a bonus symbol with a garage door, and a wild logo.

This one’s the result of a partnership. A huge number of new games are offered this way right now, and in this case we’re looking at a slot machine from Reflex Gaming, which is available on Yggdrasil’s platform. 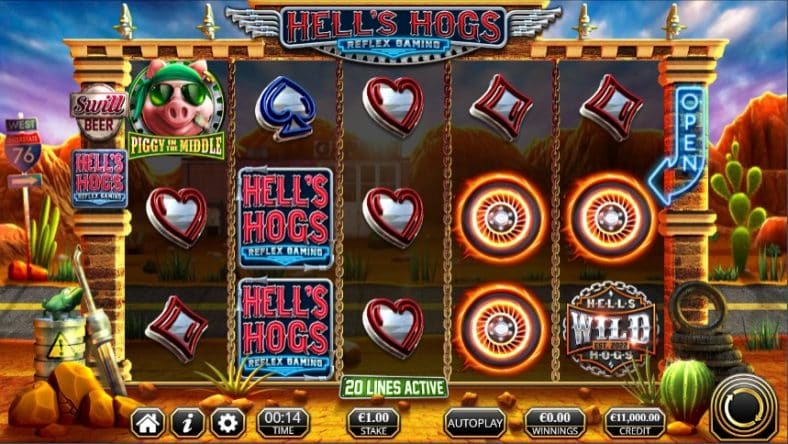 Make it as cheap or as expensive as you want it to be. Keeping in mind that it’s not a volatile slot, you could go as high as $100, even though the starting point is at a very low $0.20.

They went with the usual setup, where 20 active lines are used for just 5×3 reels. Nothing unusual there, and getting paid requires having 2+ or 3+ matching symbols arranged on an active line, left to right.

The first feature I’d like to talk about, is the Wild. Shown with its own logo, it’s going to be easy to spot on the reels. The role it has, is that of a replacement symbol. This only happens for regular symbols, when it helps them form winning combinations. You can’t replace one of the special Pig symbols with a wild.

They also added a sort of mystery symbol, which takes the form of a Garage Door. Opening up, it transforms in a regular symbol or a wild.

Piggy In The Middle is the first of three bonus features that the game has. This one requires 3+ scattered Pig symbols, the ones colored in green. It asks you to click on Stop, and this gets you prizes, along with multipliers, or the chance to double the win.

Biker Bash uses 3+ scatters with the pig wearing a horned helmet. In this case, we’re talking about 10 free spins which can be retriggered. There are also multipliers as high as 30x.

Wild Ride is the final feature, and it needs three scatters on the 1st, 3rd and 5th reels. You receive 5 free spins, and each one will have super wilds on certain reels. These super wilds can replace any other symbol.

I think that you’re going to appreciate the potential of the game, which can pay 10,136x the stake. The reason is not that it’s an unheard of prize. Its low volatility is the one that is surprising, since the slot can pay so well. I’m not a big fan of its 95.63% RTP though.

Hell’s Hogs delivers enough decent features, but most of all I love that it pays like a volatile slot, and yet it’s designed for casual players.