Space and science fiction themed games in general, have the potential of making the player dream, but the developer needs to invest a bit of time into its story and design, for that to be possible. IO, though it’s supposedly themed around one of Jupiter’s moons, doesn’t go further than showing an image of it from orbit.

Once you get to the reels, all you see is a mix of classic symbols and Royals, and the only interesting thing about them is the way they land and move in the game area. It looks like a bin filled with small balls, which will move when some of them get removed, in the manner expected when gravity is involved. That’s actually the name of a feature that the game uses, Gravity, to explain the movement of its symbols.

As for what those symbols are, they include the Royals, and then there are also the classics, meaning Lucky 7s, Clovers, Diamonds, Stars. You add the wild and bonus symbols as well, and that’s the entire list. 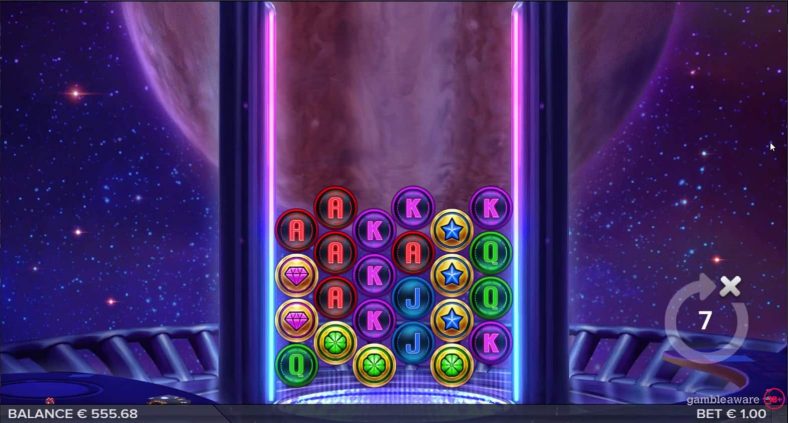 ELK Studios is the name of the developer that’s offered us IO, a company which doesn’t release slot machines all that often, but which I’ve come to appreciate for their quality when they do launch. Quality is pretty good in general, and with big payouts, average RTP and enough features to keep them interesting for a while.

$0.20 to $100 will be the amount that is wagered per spin, and it will have 100 coins in it at all times, regardless of the value that is selected.

It’s your typical ways to win system, even though it might look unusual at first, thanks to the way the 6×4 reels are organized. You start off with 4096 ways to win, and as the game area expands and gets up to 8 rows high, you could have 262,144 ways in total eventually.

IO is a game with ways to win, so combinations get formed with matching symbols that are on consecutive reels, left to right. As the avalanches/cascading reels mechanic triggers after each win, the symbols involved are removed, and there will be additional rows of symbols added to the top. The empty positions will be occupied with the help of a Gravity mechanic, which allows symbols found in taller positions to fall down naturally. If there are enough avalanches triggered, the game area can get up to 8 rows high, and there would be 262,144 ways to win active then.

There are a couple of different wilds present inside, including a regular one, which can be a substitute for any of the other symbols.

Another one is the Wild Forge, which turns empty positions below it into multiplier wilds, and which can go up in value as the symbol is used. It transforms into a wild with a multiplier once it reaches the bottom, as a result of Avalanches.

Charged Wilds may also show up, and will be useful for the next four wins that it contributes to, losing a life after each such event.

Lasers can trigger and destroy symbols, triggering avalanches next, when their symbols show up on the reels.

Finally, there are 7 to 15 free drops that can trigger, via 3 to 6 scatters in view. You get to use the full game area, with 8×8 reels and 262,144 ways, along with sticky Wild Forge and Charged Wilds.

Wins of up to 5,000x the stake will make for decent potential in a slot machine these days, so even though the volatility is medium-high, the game is not a bad choice. RTP is also good, at 96%.

IO doesn’t impress completely, but ultimately it will be a game with good features and interesting action, quite different from many of the others that it competes with.