It’s a sequel to another Microgaming slot, with the previous title telling us about how the main character is looking for El Dorado. He’s traveled to Egypt now, and the search for treasures continues. The symbols give us logos, Jungle Jim, a Book of Dead, treasure chests, pots and various gemstones.

Jungle Jim and the Lost Sphinx 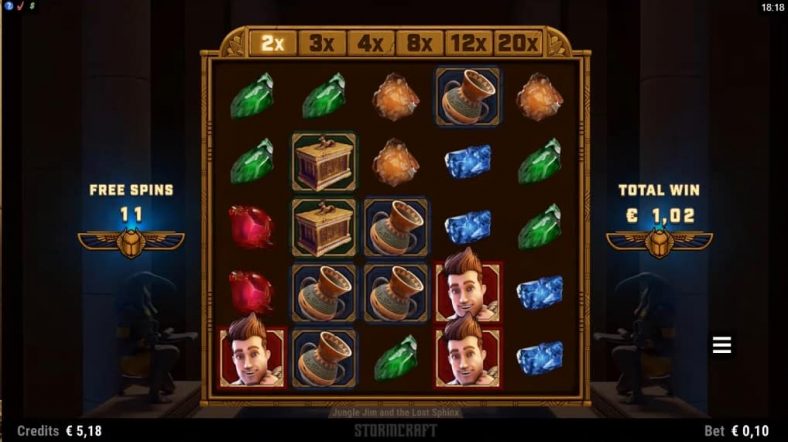 Microgaming is collaborating once again with a smaller studio, in order to develop a sequel to a popular slot of theirs. This time, we’re seeing what Stormcraft Studios can achieve. Microgaming gets exclusive rights to this game, but it’s the developers from Stormcraft that created it otherwise. Another game where this happened, is in Agent Jane Blonde Returns, a sequel for a different Microgaming slot.

The game’s asking you to select a bet for the upcoming round, and you’re given a range to work with. The minimum possible bet is $0.10, while the maximum one is at $80.

The regular side of the game has 5×4 reels and 35 active lines. At times, the game area will get a boost, expanding to 5×5 reels and 50 active lines. A fair mix of fun features are included, and you will find that creating winning combinations will result in Rolling Reels, a potentially very profitable feature, which impacts every single winning round.

Have Jungle Jim Logos appear on the reels, and you may use them in all sorts of winning combinations. Yes, this is the wild feature, a substitute which works with all regular symbols.

The Rolling Reels will insure that you get several chances at winning, as long as you trigger at least one combo. It removes winning symbols, allows others to occupy the empty positions, and it may result in additional combinations. Even better, as you go through through several rounds with Rolling Reels, you also increase the level of the game, with a bigger game area and higher multipliers then available.

You start off with 5×3 reels and 35 lines, but then you get to 2x, 3x, 4x (where the game area also expands to 5×5 & 50 lines), 5x and 10x multipliers. You need 5 re-spins, before you get to the highest multiplier, but it will be worth it. A Second Chance Respin will occur, if you’ve gotten through at least three rounds of Rolling Reels, and you have a losing round then.

Via scatter symbols, which need to land 3+ times on the reels, you can get access to 12 free games. The game area is at its highest now, and the multipliers will be doubled in value, so now they’re between 2x and 20x.

It’s one of the better games from Microgaming, at least in recent times, as far as top payouts are concerned. With a jackpot of 6,250x possible, this means that at its highest, the game’s rewards could offer up to $500,000.

You’d have to be quite lucky to get that much, or even get close to the jackpot, as the game is considered to have high volatility. It’s on the risky side, but a lot of players will embrace it, provided that there is a chance at good payouts as well.

With an above average RTP, of 96.10 to 96.30%, Jungle Jim and the Lost Sphinx looks like an adequate release, and long-term it’s a fair enough slot.

I liked a lot of things about Jungle Jim and the Lost Sphinx. It’s exciting to play, especially with those potential 20x multipliers, it looks pretty good visually, and the list of features helps make it fun also.