With a title like Lady Earth, the game does seem to have a certain fantasy inspiration to it, using nature as its basis and our planet in general. What you see is not some green forest with fairies flying between the trees though.

The action of this one takes us to space, where we get to observe the stars, while in front of them there is a game area with 5×5 reels. Mostly, you get a variety of animal or elemental related icons, made out of stone by the looks of it. Lady Earth’s face is shown in one of the symbols as well. It’s an OK design, the quality is there, it’s just that those symbols are not that interesting to look at. 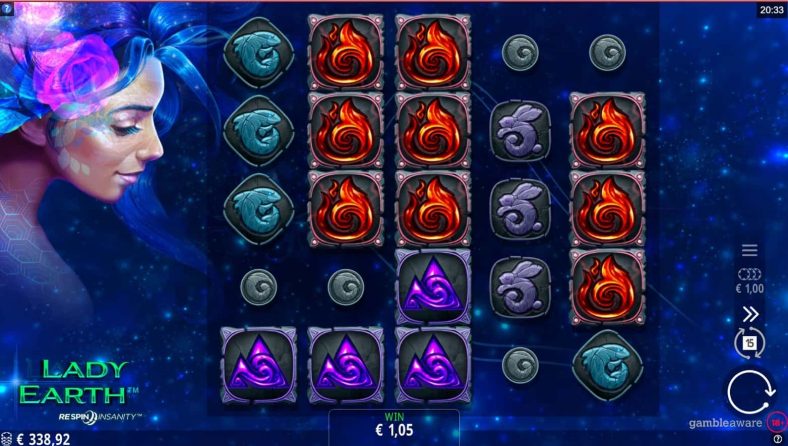 You’re looking at a slot machine which is available from Microgaming, but it was originally designed by Crazy Tooth Studio. The larger of the two, Microgaming, has a partnership program of sorts, where smaller studios are offering them exclusive access to the games they create. Crazy Tooth has a few others that they’ve launched with Microgaming already, and they appear to be one of the better developers in that program.

You get to play Lady Earth in exchange for a bet of only $0.20, but there is always the possibility to go much higher, up to $300 per spin even.

The slot’s layout is not a typical one, and as you’re getting to spin 5×5 reels, there will be 51 paylines that combinations could form on. These are regular combinations, which you’re forming with 3 or more symbols of the same type, when they land on the same line.

Lady Earth will not offer you a lot of action, and it might even get boring at times, as there is a chance to get a winning round for about 1 out of 7 that you go through. With 6 spins out of 7 where nothing is happening, you might be a bit bored at times with this one, though once a win lands, there is a guaranteed feature to keep you entertained.

That guaranteed feature is Respin Insanity, which will trigger for rounds where you get a win. The respin occurs for the winning symbols, bringing on the reels new symbols from the outside area. Once the new symbols stop coming, the respin feature ends.

There is a bonus game as well, one which will trigger via scatter symbols that land in three positions around the reels. It’s a picking feature, which allows you to make choices from an area with 9 options. You can get prizes, multipliers for them, tokens, or skulls. Getting 4 tokens collected will move you to the next level of the feature. You either get to the end, or you get four skulls and the feature finishes early.

The potential for this one isn’t huge, as Lady Earth only promises to offer rewards of up to 450x the stake, which is low by most standards. On the other hand, this is not the type of slot machine to have very high volatility either, and in fact it’s described as a much more palatable Medium.

Lady Earth delivers an interesting mix of features, along with adequate graphics, so I can imagine it being something interesting for players to try out. Ultimately though, the kind of rewards mentioned here are the type that you’d expect in a slot with low volatility, and the hit frequency is too low.