Did you know that the legend of King Arthur describes two different weapons rather than one magical sword? There’s the sword Arthur has drawn from the stone and the “true” Excalibur given to him by the Lady of the Lake. Both seem to have been powerful weapons when handled by a skilled warrior and it appears both came from another realm, so let’s forget about accuracy and instead talk about the magical powers of Excalibur designed by Red Tiger Gaming.

Legendary Excalibur video slot is a 5-reeler which pays both ways. The gameplay is quite simple and it won’t take you long to realize where the big bucks are coming from. Wilds are responsible for all action so keep your fingers crossed for as many super-sized substitutes as possible.  They’ll provoke the kind of rain you’ll not have seen before and often enough result in massive payouts. 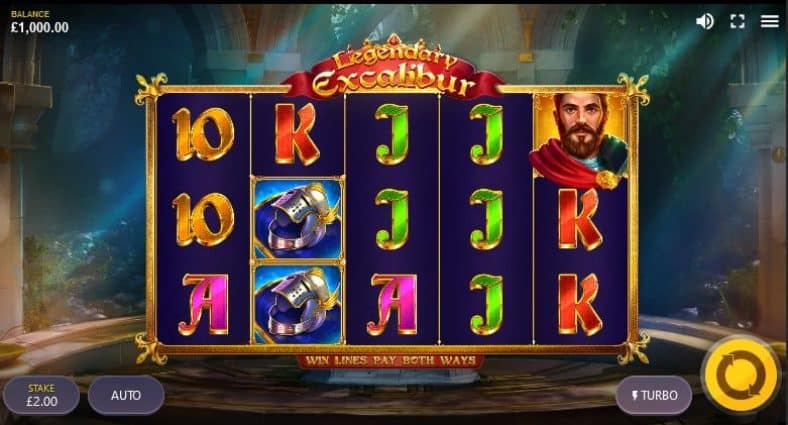 Red Tiger Gaming was founded in 2014 which makes it a newbie in comparison to industry veterans like NetEnt and Microgaming. It was initially targeting Asian markets but soon spread to Europe and other parts of the world.

The ambition to become one of the leaders may not be as realistic as the team would like to think but the fact remains they did manage to snatch an EGR Award in Innovation in Slots Provision category. Daily Jackpots, progressives guaranteed to pay by certain time, were at that point a unique goodie on the online gaming scene.

Legendary Excalibur happens to be one of the simplest slots produced by Red Tiger Gaming but the company’s portfolio also includes titles with numerous special features and among them Three Musketeers, Rainbow Jackpots and Crazy Genie. The fondness for Wild action comes through in more than a few; there are 10 different substitute icons in Ten Elements while Chinese Treasures features a dragon which populates entire reels with Wild symbols.

The game uses a standard 5×3 layout with 10 fixed paylines. Symbols have to appear on consecutive reels either from the leftmost or the rightmost side in order to pay.

Players can bet between €0.20 and €200 per spin and win with low-value Royals as well as high-value theme-related icons – the king himself, his golden goblet, helmet and rose. Autoplay button spins the reels automatically 10 to 100 times and offers an option to set a loss limit, stop the spinning if single win exceeds the chosen amount or stop on bonus feature.

Legendary Excalibur has no Scatters and no Bonus symbols typically found in the vast majority of other video slots. Wild is the only special icon but it comes in two formats – as a regular 1×1 Wild and a super-Wild depicted as Excalibur and occupying 3 vertical positions.

Every time the latter lands in full view, it will trigger a shower of regular Wilds, some of which will stick around for a re-spin. Should three of them nestle on the same reel, they’ll transform into Excalibur and launch another re-spin.

Legendary Excalibur is a medium volatility game with an RTP of 95.66%. The most it’s willing to pay on a single spin is 500x the stake.

The Excalibur and its rightful owner have already inspired a number of developers, including NetEnt (Excalibur slot from 2011), Microgaming (King Arthur slot), NextGen (King Arthur) and Quickspin (Mighty Arthur). Even though they’re older than this particular title, their visuals look better, there’s more versatility in terms of features and a higher win potential. True, Wild Respins can pay hefty amounts but that’s about all one can look forward to.

Perhaps Red Tiger Gaming intentionally chose to keep the game as simple as possible, both in terms of graphics and mechanics, to appeal to a certain type of players.

If you happen to be one of them, Legendary Excalibur will likely meet your expectations. Those that look for stunning visuals and tons of features might be left disappointed. At least the wide betting range makes the game fit for players with small bankrolls as well as those with virtually unlimited funds.