Lightning Strike, while it’s inspired by deities, it’s not using the lightning bolts of Ancient Greece, as you might think at first.

It’s actually a Nord themed game, which has images of Thor, Odin, Freya or Loki on its reels, along with several supporting symbols, but also with plenty of Royals. It’s an OK design, nothing too special. 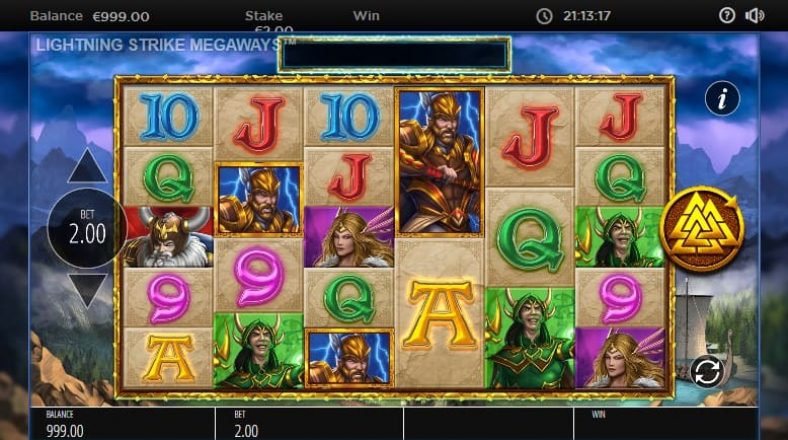 While Blueprint Gaming may not be the most popular name around, if you’ve been around the gaming industry for a while, you’re likely to have heard of them. The company has a good reputation, a varied range of slot machines, and it’s one of the companies included in the huge Gauselmann Group.

They have been releasing Megaways slot machines quite fast lately, and this is one of those new titles, which are possible thanks to a licensing deal signed with BTG.

Don’t worry about the bet setup, the game asks you only to pick a bet for the round, not to cover all actual ways to win which are available. As such, you get a range of $0.10 to $20. The game will simply rely on this total amount, as a basis for its jackpots.

You play this game the same way that you would any other slot machine with ways to win, as winning combinations still form with matching symbols appearing on consecutive reels. The thing that’s different about the Megaways system is the much higher number of potential ways to win.

The 6-reel megaways slot machine is no longer something rare, you can get a couple of dozen games by now which use the system. In the case of Lightning Strike, the 6 reels can get a maximum of 15,625 ways to win, as you can have at most 5 symbols on each of its columns.

Mystery symbols are going to be present on its reels, and whenever you get them, these will all transform into a single random symbol, which needs to be one of the regulars.

The wild feature comes through as a symbol with Thor’s Hammer in it. You don’t get it on all reels, only on the middle four ones, but it’s going to be incredibly useful even so. This is an expanding wild, which gets locked in its position and triggers a respin. Additional respins can be obtained, if you land more expanding wilds on the other reels.

Cash & Mega Spins Ladder is a way for you to gamble your winnings, when they’re at 5x the stake minimum, and try to get a bigger reward, or access to Mega Spins. Up to 100 of these Mega Spins can be obtained, through this gambling feature.

The Mega Spins will have more Mystery symbols and wilds, plus there are the multipliers from the expanding wilds to look forward to as well.

As most Megaways games, Lightning Strike is also quite impressive when it comes to potential payouts that you can get from it. Rewards as high as 10,000x the stake are expected from it, which brings the game’s potential to $200,000.

Regarding its payouts, it’s relevant to mention the Return to Player, which is set to 95.96% (there is a little bit of room for improvement there). Obviously, it’s a High Volatility slot machine, but one that pays both ways, as most Megaways games do.

It’s not that original of a theme, but the Megaways slots tend to have a bigger focus on exciting features and big multipliers, and it works well for them. Lightning Strike is a decent game for the series, and it brings us something unique in this new and exciting category.