Lucky Riches Hyperspins is going to borrow from the oldies, using as symbols classics that we’ve seen way too many times already. Diamonds as scatters, wilds, Lucky Sevens, the Chips, Bar logos, Bells or Dice, along with Royals, these are all options that we’ve used many times before, and are not particularly interesting. 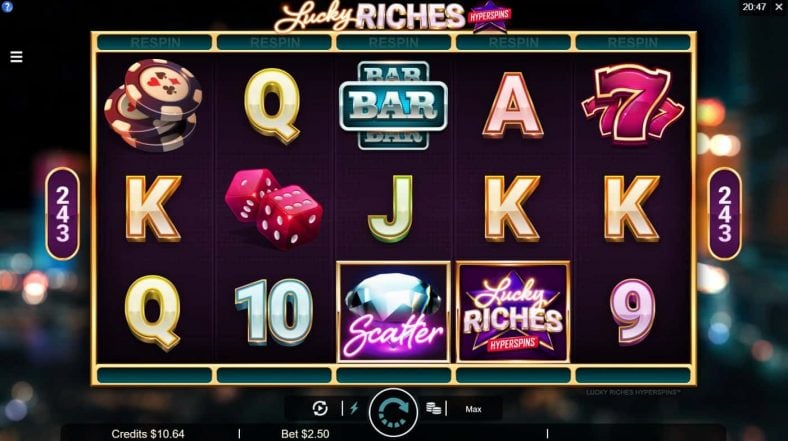 It’s one of Microgaming’s own releases, though only a few came out directly from them lately. The giant has been developing content for the online gambling market since the mid-90s, and one of the biggest collections of slot machines is available at the casinos that use their platform. You will find many of their more popular older games there, but the recent ones haven’t been getting as much attention.

Since the game has lower volatility, it allows for bigger bets, of up to $125. Using the equivalent of 25 lines for its bets, the slot will spin the reels even for as little as $0.25.

This is not an original game, so most of the options found inside should be easy to figure out. You form combinations via 3+ symbols, landing left to right, on consecutive reels. The system, with its 5 reels and 243 ways to win, makes it easier than others to get paid.

The Hyperspins mechanic is one of the major extras that Lucky Riches offers, so much so that it is even mentioned in its title. It is not unique to this game though, it’s been used in a couple of other Microgaming slots, and furthermore, it is not something that you get for free. You pay for each use of this feature.

It consists of the option to Re-Spin individual reels, in exchange for a fee. This can be done in order to try and get a symbol for a combo, so if you’re missing a symbol on reel 4, you might be able to get it this way, and turn a 3-symbol combo into a 5-symbol one (if you were missing only the 4th reel symbol). The cost that’s associated with a re-spin can be lower or higher, depending on what the other reels have on them, and on the potential payout. If it allows you to form a low paying 3-symbol combo, it will be cheaper than if you could get a top jackpot from it.

As for the regular features, those are the expected ones, using a wild for one, though you get it only on the 2nd and 4th reels.

The other one is going to consist of free spins, 15 of them, triggered via 3+ Diamonds landing scattered on the reels. Payouts of up to 100x are delivered, alongside those free spins. The big advantage of the free spins, which will make many enjoy them, is that they have a 3x multiplier, which applies to all wins.

A top jackpot of about 480x the stake, turned into up to $60,000, is the best reward that Lucky Riches Hyperspins will deliver in a single spin. That doesn’t sound like much of a deal, but considering the Low volatility of the game, and that its RTP is set to 96.52%, I’d say that it’s a decent pick for any casual player.

If you’re going to use the Hyperspins option whenever it makes sense, the RTP of the game jumps to 97.49%, but obviously this is a matter of paying attention and always rolling the re-spin when it makes sense, so getting that value is on you.

This is not a game that innovates, it uses some of the mechanics and features that we’ve seen in other games of theirs, and while it might work just fine for casual players, veterans will likely not give it a second glance. An OK game, but easy to forget, even for the players that it’s addressed to.