NetEnt is undergoing an expansion process into the Asian market, and they’ve been launching a lot of new slot machines that are destined for the preferences and culture of that region. Magic Maid Cafe is just the latest example, a clone of Gonzo’s Quest, so the mechanics are solid and expected to do great in Asia as well.

They selected an Anime style design for Magic Maid Cafe, used a selection of symbols that uses sweets and young women dressed as maids, and what came out is a sickeningly sweet look. It’s not for everyone, but then again, it’s a game that was built with a certain audience in mind, so that’s OK. 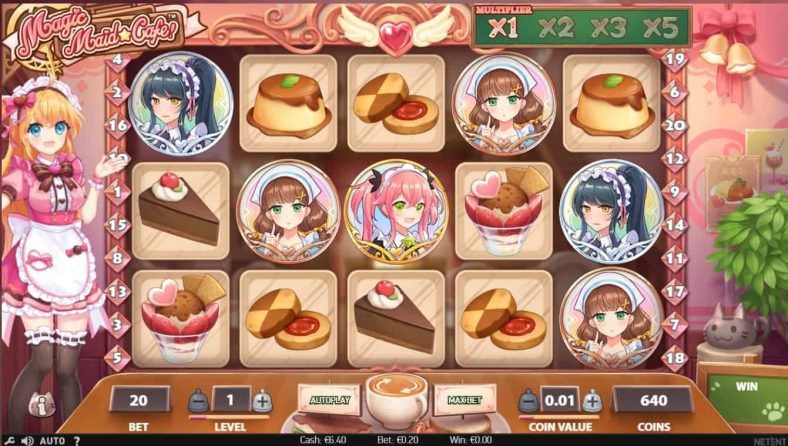 NetEnt, one of the top game developers for the online casino industry, has been designing excellent slot machines for decades now. Hundreds of titles have been made available, and even some of the decade old ones will still look good, a testament to the way this developer approaches the design process.

As for the type of game that this is, it’s a regular 5-reel slot, with 20 active lines. Using Avalanches/Cascading Reels, along with multipliers and free spins, it’s not a new type of game, and if you’ve played Gonzo’s Quest in the past, then you know exactly what you’re getting here.

As I mentioned above, the features of Magic Maid Cafe aren’t special, but even today they have the potential to be quite interesting. Avalanche is the name given by NetEnt to the system where winning symbols cascade off the reels, to be replaced by new ones, so that new combinations get a chance of forming.

The only other feature that the game will offer, the Free Falls are going to require 3 scatter symbols on the same payline, to get you 10 rounds. If you get them on two lines, then there are 20 Free Falls triggered instead. A tripled multiplier range will make this feature attractive, with wins boosted by 3x to 15x now (up from 1x-5x in the base game).

In terms of top payouts, Magic Maid Cafe can deliver wins of up to 2,300x the stake, which is not impressive by today’s standards. A game with medium to high volatility, and with a 95.97% RTP, it’s doing fine as far as payout potential goes. These days though, it’s got major competition from similarly risky games, but with 10 or 20x the top payout that this one has.

Magic Maid Cafe is offered by the developer for the Asian market, and it shows in its Anime-style theme and general design. I think you will appreciate the graphics quality, even if the theme is too sweet-looking. It’s good that the mechanics involved are already a proven success, since they’re copied from Gonzo’s Quest. Overall, definitely a game to be looking into, if you like the theme. Otherwise, you can go for Gonzo’s Quest, it’s basically the same game.