The desert has been a source of inspiration for quite a few developers already, and we once again get to see it and its inhabitants in Microgaming’s Magic of Sahara. The story appears to be about local traders riding camels, traveling in caravans across the desert.

There are images of the camels, of the traders, beautiful young women, along with bowls filled with gemstones and gold, but also several Royals which seem badly designed. All in all, it’s not a great design, just an average looking one. 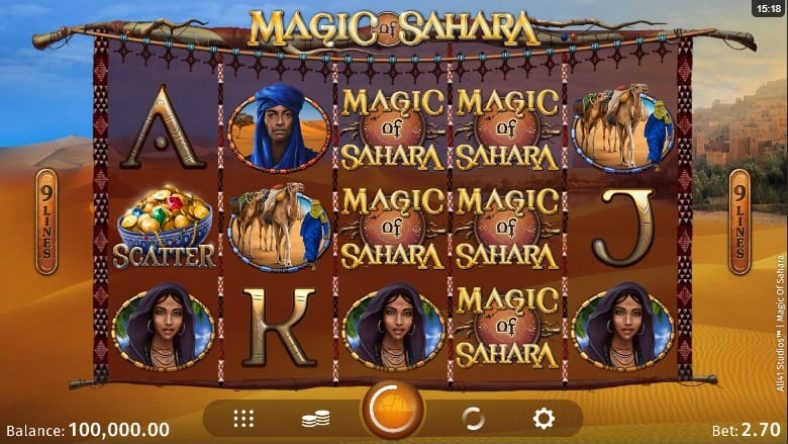 Magic of Sahara is available exclusively at Microgaming casinos, and it’s one of the games that was designed for them by a smaller studio. They have several such independent studios working for them and crafting their games, and in this case it’s All41 Studios that did it.

It’s a young developer, which designed Le Kaffee Bar as well, also as an exclusive Microgaming slot machine. As for Microgaming, it’s a giant of a company, with hundreds of excellent slots and a history dating back to 1996, the year of the first online casinos.

When playing this game, you select a wager for its 9 lines, and it will always involve 9 coins. The minimum wager available to you, of $0.09, is just a starting point. You can increase the line bet to as much as $5 per line, so the total bet could end up at $45.

It feels like a fairly simple game, evident from its use of just 9 active lines on 5×3 reels. The features do help improve it, to some extent. It’s not difficult to learn how to play it, or to understand its mechanics.

Among the game’s feature symbols, the logo will be present and used as a substitute. You can get it to replace a regular symbol, which could end up creating a new combination, but it’s also capable of paying you. A big advantage of the wild is that when appearing on reels 3 or 4 in the base game, it will be super stacked, and so it’s quite likely that you will get several of them at the same time.

The Tuareg man, a trader, will show up on the reels and will allow you to collect a token whenever this happens. Once you have sufficient tokens collected (25), there will be free spins triggered.

Another way to get the free spins going is through scatters, up to five of them required. Wins of 100x, 25 free spins and a multiplier which will double all wins, these are part of the effect that scatters will have on the game. Even better, all reels can now get super stacked wilds on them, not just two of them.

There are top wins of 2222x total stake being paid in Magic of Sahara, which is a good payout for a slot machine from Microgaming.

This should get you paid up to $100,000 in a single spin, which is a life-changing amount for plenty of players. The RTP which the game works with, set to just 95.29%, is one of the downsides I see with it, since most slots offer a minimum of 96%.

Magic of Sahara will deliver only average graphics, and the RTP isn’t a lot better either. On the other hand, I did enjoy the features which the game provides.