A wizard’s laboratory is easy to recognize when it makes an appearance in a slot’s background image. That’s how we usually get a look at it, and Magical Reels uses it for that same purpose. We’re looking at a pentagram drawn with blood on the ground, at spell books and herbs on a table, while another holds potions and a candle holder built into a human skull.

Things are not as exciting when we get back to the reels, where we find a selection of fruits, toadstools, shells, leaves, and the four potions colored in several colors. They could’ve done more with the possible symbols in a game like this.

Magical Reels was designed for Microgaming, by Northern Lights Gaming. The two have also worked together on slots like All Star Knockout, Aztec Falls, or Divine Diamonds. 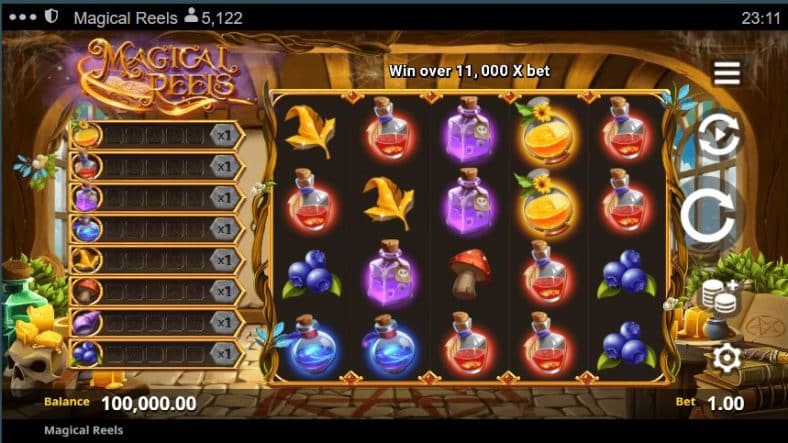 An obligatory first step when you’re playing a game, is to pick the wager size. In Magical Reels, it’s going from $0.20 to $20.

Magical Reels gets a big-enough area, of 5×4 reels, that the 20 active lines which are present actually feel low. The combinations are going to be formed in the usual way, left to right with symbols landing in fixed positions across existing lines.

The Star Meter is going to display all eight regular symbols, along with five empty spots next to each one, and a multiplier at the end. You add a 1x multiplier and up to 3 stars to random meters, whenever you manage to get Books to appear on the reels. There are 5 Books that can show up at the same time, one per reel.

To trigger 5 free spins, you need one of the meters to get 5 stars collected. Whatever multipliers were increased at the time, will be used for those particular winning symbols when they form combinations. They can be increased further at this point.

The triggering symbol is removed, so it’s easier to form other types of combinations.

It should also be mentioned that the free spins get more of those Book scatters, making it easier to fill up additional Star Meters once the feature gets going. When you do this, you get only 2 extra spins, and a new symbol will be removed.

As you can see, the entire gameplay is built around the Star Meter board and the collection of stars from scatters. The scatters are very important, but you don’t get them all that often.

I think that most players will be satisfied with the kind of top rewards that Magical Reels could pay. 11,750x the stake is the upper limit that the slot is set to. It’s an appropriate level for the payouts of a highly volatile game. I’d mention here that the hit rate is high, about 1 in 3 spins being a winner (34.48% hit rate).

You want the long-term returns to be good as well, even if they don’t apply to you in particular. 96.15% is the RTP value here, and I’m satisfied with it.

Magical Reels tends to pay often, and triggering its main features is not particularly difficult. That being said, you’re not guaranteed any big wins once you get inside, and you still need lots of luck to be able to get close to its best rewards.