The Mayans have left a lasting impression on us, or so it seems based on the huge number of slot machines released over the years, which are trying to tell their story. It’s mostly a mix of jungle themed slots, featuring long lost temples, and Mayan Magic Wildfire doesn’t stray too far away from this recipe either. They do things differently design wise though, and the quality of those symbols and background graphics is top notch, so even if you’re not typically after Mayan treasures, this slot can still be highly enjoyable.

As symbols, you will find that the game uses some less relevant gemstones in lower positions, while the better ones give us images of snakes, leopards, Mayan warriors, priests and princesses. As the big feature symbols, they used well-designed logos. 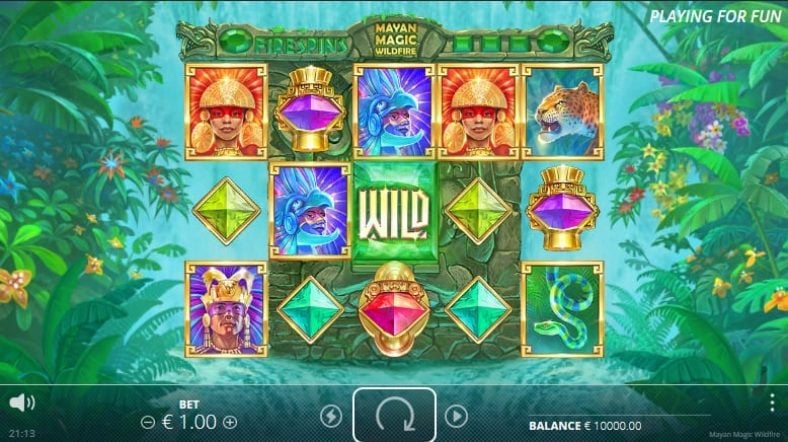 Coming from Sweden, and based in Stockholm, Nolimit City is part of a culture that has given us a large number of impressive slot developers already. They’ve done quite well for themselves, and while not the biggest gambling software developer around, they do have a good mix of slot machines, Mayan Magic Wildfire being just the most recent one. I’d also recommend slots like Creepy Carnival, Wixx or Ice Ice Yeti, titles that I found especially enjoyable.

A simple Bet option is provided, and the player may adjust it as he sees fit. It will allow for the bet to be set to a value between $0.20 and $100. Whatever the amount that’s selected, you get all the game’s lines.

5 reels spin in Mayan Magic Wildfire, with 10 lines active. It’s not quite a typical slot, it forms combinations both ways, relies on synced reels as well on occasion, so there is definitely something interesting here. It doesn’t make the game difficult to play though, all you need to do is spin the reels.

The usual wild symbol will be in play for Mayan Magic Wildfire, and it will be present on the middle three columns. The slot relies on it as a substitute, being able to help various winning combinations form, as long as the other requirements for a win are also met.

The Sticky Wild forms if this symbol lands in the middle position of a reel. The symbol remains there for the next round. Each wild you get, ends up giving you one more spin in this feature. You also get an increased multiplier, if you have at least three wilds. Another 1x is added to the multiplier, for every three new wilds after that.

Several random features are also present inside, and the Mystery Wild is one of them. It will transform a symbol found in a middle position on a reel, into a wild, with the Mayan Wilds feature coming as a result.

As for Mystery Sync, it also comes at random, and it syncs the symbols found on the middle three reels. What’s left for you is to get the other symbols for winning combinations, either on the first or the last reel.

The biggest winning combinations, the ones involving symbols with the Mayan Princess, can end up paying an impressive 2,000x total stake, if they manage to get all positions on the reels (wilds included). A jackpot of $200,000 should be available, if the player uses the maximum bet.

As its RTP, the game offers back 96.04% of the amount wagered inside, or at least that’s the calculation over billions of spins, or the game’s entire lifetime.

Mayan Magic Wildfire is a very well designed game, offers some good features and big enough payouts to make it an attractive target for players.