A bombastic and extremely entertaining online slot, Mining Fever lets you dive into the depths of an dynamic mine run by the trio of grumpy dwarves. A mixture of a fantastic world and real-life mining equipment gives this game a unique appeal and makes the adventure more realistic. The scenery is not frozen like in most of the slots, but vibrant even if the reels are not moving.

By playing Mining Fever, you will be a part of a cartoon with high resolution and high-quality graphics. You will see also a bad-tempered dragon, the mine rail transporting the ore and the lamps waving, while in Bonus Games you will be transported even deeper underground to discover secluded areas of this incredible treasure trove. 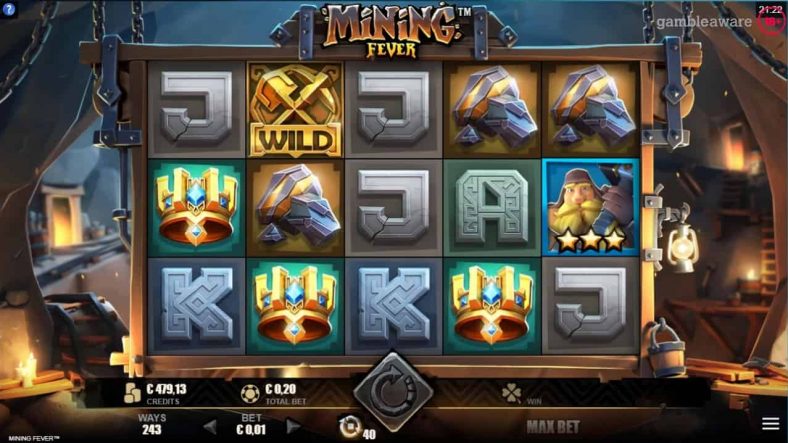 Vienna-based developer, Rabcat Gambling was established in 2001 and has ever since pursued a vision that makes no compromises with quality. The Austrian company philosophy was never to make as many games as possible in the given period.

Unlike their highly productive competitors, they have been making fewer games, but the quality remained undisputable. Their games are featured with fantastic visual effects, more resembling Disney and Pixar masterpieces than the ordinary video slots. The Bonus Games in their slots are an opportunity to take the players to other realms and spice up the games with something new and extraordinary.

The game is quite easy to play, once the players are used to the betting options. Even though the 243 ways to win are always active, you will need 20 coins for each spin. In the bottom left corner, the arrows are used to increase and decrease the bet, which is then multiplied by 20 to get the total wager. The total bet is displayed right above the bet arrows and can go from $0.20 all the way to $40.00.

Also, there is a shortcut to the maximum bet located on the right side of the Spin button. Mining Fever is played on 5 reels and 3 rows with a minimum of three identical symbols to create a winning combination. The three dwarfs represent Scatter symbols each in charge of activating different special features. Wild symbols also come in different shapes but act the same and serve to substitute other symbols in creating winning combinations.

Drill, Bombur and Thunder are the names of three vivid dwarves that possess different skills and activate different features.

Triggered by 2 Drill symbols, Driller’s Dwarven Drill feature provides 1 free spin in which one reel is picked as a gold vein and gets populated by Wilds. 2 or more Bombur symbols during the main game activate Bombur’s Dwarven Bomb feature that consists of 2 free spins. On the first spin, Bombur’s Dwarven Bomb visits reel 2 or 4 and acts as a fixed Wild. In the second spin, it works like a bomb dispersing 3 to 4 Wilds all over the reels.

Two Thunder symbols automatically start Thundar’s Dwarven Hammer feature. One free spin is awarded with the same icon filling two adjacent reels (either reel 1 and 2 or 2 and 3). If all 3 dwarves show up at the same time anywhere on the reels in the main game, another feature will be activated. Dwarven Gold Train feature consists of 8 Free Spins. The dwarves take their train and leave a trail of Wilds, starting with reel 1.

Mining Fever is a low-volatility video slot providing a maximum payout of 500x total bet. If we also take into consideration the game’s RTP of 96.13%, we could say that this game is designed for patient players, those who are not very keen on surprises, either bad or good. Having four different special features, the game offers additional ways to boost your wins.

A masterpiece in terms of visual design, Mining Fever is a feast to the eyes made for the players who expect the highest level of graphics. Everything is carefully drawn, starting from the background, over the reels, to the characters that look like taken away from the modern animated movies.

Even with low volatility, Mining Fever promises a gaming adventure and manages to keep it by the introduction of animation and four bonus features. The idea of having three Scatter characters that trigger different bonuses makes this game amusing even if you don’t succeed in making huge wins. The maximum payout of 500x total bet will hardly satisfy the high rollers, but even they will play Mining Fever for its extraordinary visual quality.