Each of us has a kid hidden in a grownup body and Big Time Gaming knows it. That’s why the developer chose to take us back to our childhoods using a board game loved by children (and some adults) all over the world. Monopoly Megaways is a 6-reel slot which uses BTG’s own Megaways reel modifying mechanic as well as its new gaming engine called Reel Adventure.

Every spin provides a different number of ways to win owing to the changing number of symbols per reel. Monopoly Megaways can thus pay up to 117,649 with 6 reels able to stock up to 7 symbols each.

Every winning combe will send you wandering around the game board accompanied by Mr Monopoly himself. The walk helps you build your property portfolio and consequently enjoy additional benefits once you trigger Free Spins in one of the two ways. 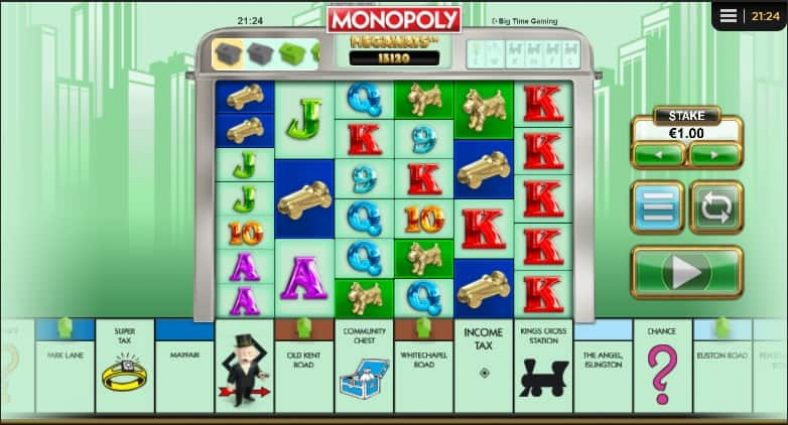 Big Time Gaming started off in 2011 as a small game studio trying to compete with giants such as Microgaming, NetEnt and Playtech. Valuable partnerships and a creative team soon made the company a serious competitor determined to differentiate via continuous innovations.

The Megaways mechanics has been a huge success and many other developers are happy to use it under licence. However, it’s not the only major innovation we’ve seen from BTG. We’ve come to expect unique features and/or mechanisms in every new BTG slot and we’re rarely disappointed.

There’s only one thing to do before hitting the Spin button: decide how much to wager.  Bet sizes start out at a minimum of €0.20 and go up to €40 per spin. If one decides to use Autoplay, they’ll be offered to choose the loss or single win limit which stops Autoplay session.

Monopoly figurines act as high and mid-payers while generic Royals provide low-value wins. Below the reel area, you’ll see the familiar Monopoly road filled with properties, utilities, train stations and other fields typically found on the Monopoly board. Wins are awarded for identical symbols on adjacent reels starting with the leftmost one.

Wild subs for other game symbols and can appear on all reels except for the first. The game uses cascading reels also known as reactions. Every payout is followed by the removal of winning symbols and the addition of new ones sent in to fill vacant positions, and each reaction sends Mt Monopoly on a walk.

If he stops on a Property on your third reaction, a House is built. Every further cascade awards an additional House. If he lands on a Train Station or a Utility, you’ll become their respective owner and the true value of this ownership becomes apparent once you start spinning for free.

When Mr Monopoly stops on the GO Square, the next spin uses the maximum 117,649 Megaways. Landing on the Community Chest sends him to a random Property and adds up to 4 Houses. Every time he stops on CHANCE, one of three will happen: a spin at max Megaways, a visit to a random Property, or an immediate entry into the Free Spins bonus round.

There’s one more way to start playing for free and that’s by collecting 5 Houses on one of the Properties. The player wins 8 Free Spins to start with plus 1 extra spin for each train station they own and every additional House beyond the fifth.

Every additional feature trigger following the first awards 3 more spins and it’s possible to add 5 spins to the count by landing on CHANCE. The win multiplier begins at x1 and increases by 1 for each owned utility and each House on every Property Mr Monopoly lands on during the bonus round. Once free-play ends, collected Train Stations and Utilities are lost but the player still remains the owner of all Houses on unvisited Properties.

Monopoly Megaways is a highly volatile game offering a theoretical return of 96.39%. The max win potential is 15,000x the stake, more than one can hope to win by playing most other Megaways slots.

Big Time Gaming has once again demonstrated the innovation power of its capable team. While this isn’t the first Monopoly branded slot we’ve seen, it’s doubtlessly one of the best thanks to an engaging gameplay, numerous win opportunities and more than decent max win potential. Production quality is high and RTP above average; the only downside may be a relatively low max bet (at least for high-rollers).