Microgaming is adding its second Steampunk themed slot machine in recent months, with Noble Sky, the other being Fortunium Gold. In this case, we’re talking about a game that was designed by another partner than the other release. It’s a Neon Valley Studios game, with fairly interesting graphics for you to check out.

As a Steampunk style game, the fact that it has a focus on air ships is not much of a surprise. You get these beautiful machines in some of the game’s top symbols, while others range from the captain, to the two women, a top hat, compass and the Royals (starting with the 9 and going to the A).

It’s part of Microgaming’s collection of slot machines, alongside hundreds of other titles. It’s one of the largest collections of casino games, and it’s easy to find, more than 800 online casinos relying on their content these days. There is enough variety in that collection, alongside average and above average graphics, low or high volatility, and even progressive jackpots. 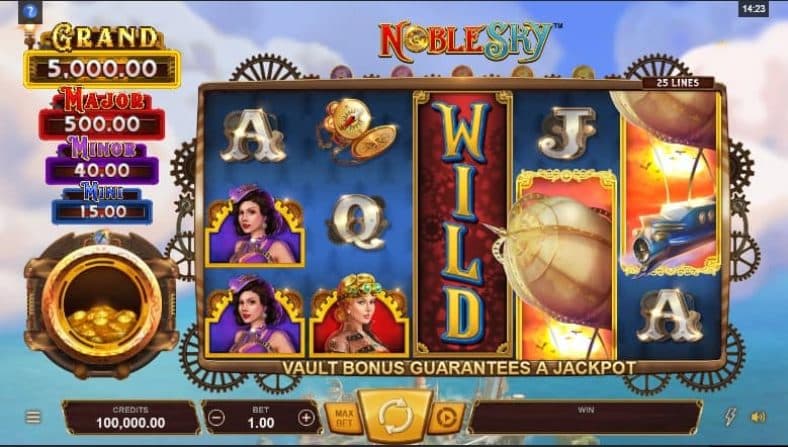 When it comes to actually forming combinations, there is nothing special about it. The same 3+ symbols have to land on an active line, going from the left towards the right side. There are some features incorporated, which make the action interesting, particularly during respins, but nothing unique to it.

While they’re not going to pay you directly, wild symbols can be of great help along the way. Showing up on the last four reels, they have two variants, a regular one and an Airship Wild.

If the Airship Wild lands stacked and fully visible, meaning that it takes over a reel, it will also bring about a Respin feature. During this bonus, you have the Airship moving towards the left side, one reel at a time. Respins continue for as long as the Airship is visible, but it will eventually drop off the reels.

The more Respins come, the higher the multiplier which follows. It starts from 1x, then goes to 2x, 3x, 5x and 10x. You need five respins, before you can get the full multiplier.

Another big feature is the one that has you collecting gold coins when they appear next to symbols. The more coins you get in the vault (bottom left side), the higher the chances of getting the feature to trigger. It’s a picking feature, where you have to match 3 jackpot icons. This can lead to wins of 15x to 5,000x the stake.

Wins can be decent, up to 20x paid on each line in regular spins, and up to 200x for the respins. 5,000x seems to be the top potential there, which just so happens to be the value that the Grand Jackpot can deliver during the Vault Bonus game.

Even though it’s capable of paying very well, volatility is only low-medium, and the hit frequency is quite high, somewhere around 45%. RTP is set to 96.12%, another good figure.

Noble Sky definitely looks interesting, but then again I do love a game with low volatility that has potential for big wins. Even if the odds are low, you’re not just playing for a chance to get peanuts in exchange, and that’s fun.