We can’t say we’re often impressed with the way a slot looks straight from the get-go. But Rabcat pulled no punches when it came to designing North Storm! You’re treated to a visual feast as soon as you launch this fantasy themed game. So as the howling winds rage around you, you’ll have to brave this snowy mountain pass. Can you make it to safety under the watchful eye of the statue?

You don’t need us to tell you how gorgeous this release looks. The massive stone man in the distance really gives you a sense of scale. It shows just how perilous this path you’re traversing is. As if the existing rocks and snow weren’t enough to deal with, fresh snow continues to fall. Some snowflakes fall so close to the screen that they’re actually mildly annoying!

Available special features include the Bonus Fall system and free spins. For bonus fall, you simply need to create a win. Symbols which were part of that winning combination will disappear, to make room for new icons. Each consecutive win increases your multiplier by one, with a 4x maximum. Collect three or more free spins symbols to activate free spins, during which your multiplier increases by two, for a 8x maximum. 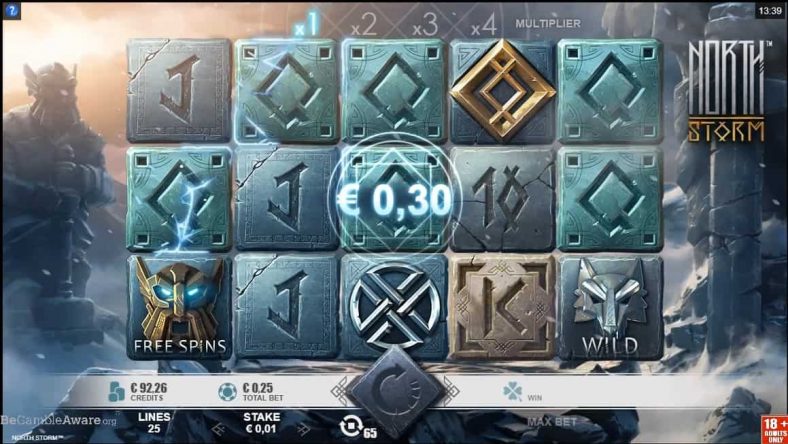 Odds are, most players have never heard of Rabcat before. If they have, it was usually in passing. This Austrian company has been around since 2001, but haven’t broken into the public spotlight until recently.

Their commitment to quality is easy to see in their latest slots, including North Storm itself! Rabcat has an established partnership with multiple operators and B2B platforms, meaning you don’t have to look hard to find their games.

This release is played on a 5×3 board with 25 fixed paylines. Gamblers can adjust their total bet by changing the value of their stake. You can wager between $0.25 and $50 per spin. Great news for casual players, but high rollers will no doubt be annoyed they can’t bet more.

We like the layout Rabcat uses for North Storm. It’s a perfect mixture of stylish and functional! It manages to look distinct in a sea of NetEnt look-a-likes, while still giving gamblers all the tools they need to play effectively.

Sadly, there are a few areas where the developer didn’t manage to impress us. One of them is the Autoplay function, which only allows you to choose the number of auto-spins. There is no way to set a win and loss limit, which is rather standard for other software providers.

After each win, the Bonus Falls special feature activates. It will take all icons which were part of a winning combination, and make them disappear! Existing symbols will fall down to take their place, while brand new ones appear on top of the reels. This allows gamblers to receive several consecutive wins, for the price of a single spin.

Collect three or more free spins icons to receive eight free spins. It should be noted that the free spin symbol is not a Scatter, so you must get a three-of-a-kind win or more starting with the leftmost reel. Once free spins are active, you can win two additional turns by collecting three more Scatters. Using this method, you can play a maximum of 20 free spins.

North Storm has a medium volatility, and a jackpot worth around 1000x your total stake. The slot’s RTP is 96.13%, which is above the current industry average.

Fantastic visuals combined with an acceptable bonus create an excellent game for casual casino-goers. That said, if you’re looking for massive wins and high volatility, this Rabcat release definitely is not for you. If you need something fun to occupy your afternoon, we recommend checking it out!