PiggyPop relies on a theme that’s not exactly common, but it’s not entirely unique either. A piggy bank that’s turned into an actual bank, with pigs as main characters in its story, that’s an approach that’s been done before. Even so, I think that you’re going to appreciate the high quality of the slot’s design, and the attention to detail. It’s an ever changing game area, thanks to the PopWins mechanic and the way it expands the reels.

Several types of symbols are implemented, starting with the Super High one that shows the Golden Pig, and continuing with high (three pig characters), medium (three objects associated with those characters) and low symbols (three Royals).

AvatarUX has built its reputation on the back of the PopWins engine, and we’ve seen quite a few of these release in recent years, all at Yggdrasil casinos. If you enjoy this one, or if you simply appreciate the mechanic, there are plenty of other options, including slots like WildPops, BountyPop, or PopRocks. 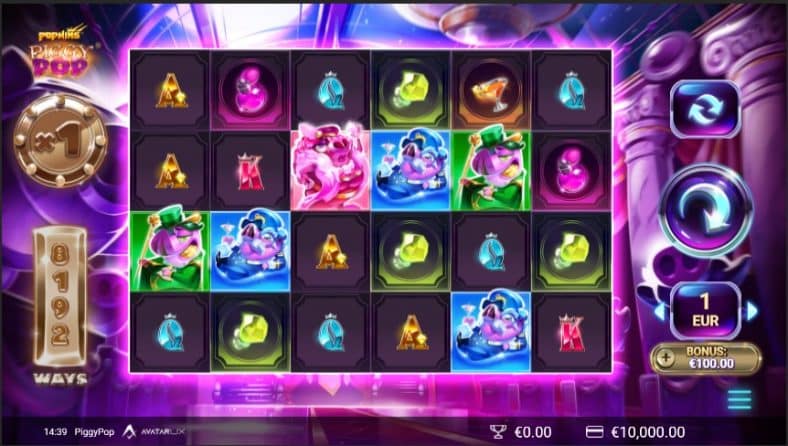 It might be more interesting once you get started, but placing the wager here is the same as in every other slot. You just decide on the amount you want to use, picking from the values shown, which have a range between $0.20 and $100.

You start playing the game with 6×4 reels and 8,192 ways to win. Thanks to the PopWins mechanic, the game area will expand when you form combinations, and could end up with as many as 524,288 ways active.

The mechanic that is central to the way this slot plays, is called PopWins. It requires that you form winning combinations first, via ways to win. It will then replace each winning symbol, with 2 new ones. As there is an extra symbol now, the game area gets a boost on all reels involved with that win. At most, you can have 6 symbols per reel during paid spins, and up to 8 during free spins. For as long as new wins form, the PopWins keep adding to the game area, but the size of the reels resets at the end of the spin.

Triggering the free spins is possible once you’ve managed to increase all 6 reels, to have 6 symbols each, via PopWins. At that point, you get access to the free spins, which will use reels with 4-6 symbols initially. Up to 8 symbols can be obtained, and the game area resets to the size of the smallest reel, so it doesn’t go down all the way if you’ve made some progress.

Another advantage for the free spins, is the multiplier that goes up by 1x after each round, without resetting until the feature is over.

Once you’ve unlocked the reels completely, you also get a better multiplier for the wins coming from the Super High symbols (Golden Pig).

It’s got a huge game area, at least there is potential for one, and so the wins of up to 10,690x the stake are not a surprise. If anything, I would’ve wanted the top jackpot to be even better.

One area where the game could’ve done better, is the RTP. At 95.50%, it’s lower than the average of 96% that most players tend to look for. The volatility is high as well.

PiggyPop continues a successful series of slot machines from Yggdrasil and AvatarUX, and it’s a decent release overall. A better RTP and higher top jackpots could’ve made it even more appealing.