The third Playboy themed slot machine to join Microgaming’s collection, is Playboy Fortunes, a game that’s been designed exclusively for their platform, by Gameburger Studios. The theme is as expected, based on the Playboy brand and on its bunnies. Unfortunately, the focus is not as much on the bunnies as the fans of the brand might’ve liked, and while the quality of the design is good, I feel like it’s not going to be enough to make this slot a better choice than the first game of the series.

Among the symbols added to its reels, the game has the Playboy Bunny logo for the scatter, a Free Spins Wheel, Wild Casino Chips, three types of 7s (1, 2 or 3 and each one with a different bunny next to it), a Bow-tie, a Playboy Club key, a cocktail and the Bar logo. 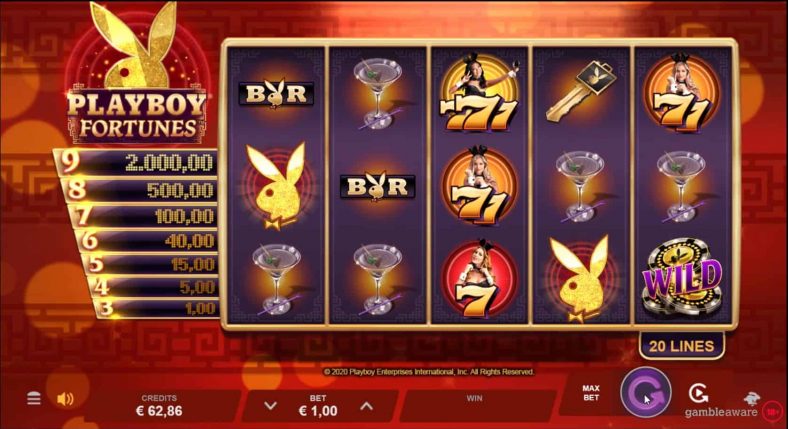 You will find the entire Playboy series in Microgaming’s collection, though only the first game, of the three released so far, has been of their design. Gameburger Studios is the company that has designed the 3rd title of the series, and they are a young company, which has only a couple of games out so far.

With the starting point at $0.20, the game’s wagers are easily accessible for most players. The upper limit is set to $60, which is not as easy to get to, but there are still players that could afford it.

Playboy Fortunes gets 5×3 reels with 20 active lines, one of the more common setups used in slot machines. All you need, is for 3+ matching symbols to land on the same line, lined up from left to right.

Help will come from the game’s features, in making the action more interesting and profitable, at least for some of the players. A wild Casino Chips symbol will be among those that help out, as a substitute in this case, but also as part of its own wins which will pay up to 125x the stake on each line that’s fully covered.

Another big one, especially as it can deliver some of the bigger prizes that this game has to offer, is the Playboy Bunny logo. It’s a scatter that you can get on all reels, and of which you need anywhere between 3 and 9, to get paid. The larger numbers are going to bring bigger rewards though, of up to 2,000x the stake (for 9 scatters).

There is also a Free Spins Wheel symbol, another scatter, though one that’s only available for the middle three columns. Get the three, to win a spin on the Wheel of Fortune. The spin will decide what kind of combination of free spins and multipliers will be triggered next. The best outcome appears to involve 30 free spins with a 3x multiplier. You can also retrigger the feature, once it gets going.

For a game with medium volatility, as Playboy Fortunes has been described, I found the rewards to be acceptable. They get up to 2,000x the stake, a good reward, which can be reached via scatter symbols.

I would also mention the game’s RTP, which is at 96.24%, good enough these days for an online slot.

Playboy Fortunes is an OK game, but I feel like that’s not enough to be a worthy release of the brand it represents. Features and payouts are a bit on the bland side, despite the multipliers which can sometimes kick in.