From time to time, the developers decide to discard the typical themes and offer an atmosphere, a feeling, an aura rather than the story you can easily recognize. Even though the mystical castle on the top of the hill could serve as an introduction into some wizard or horror theme, the rest of the game’s graphics does not follow suit.

The symbols are beautiful but generic. Different gems and card symbols are designed with the touch of Asian aesthetics. If we are to guess where this adorable game takes place, we would say Japan in the Middle Ages. 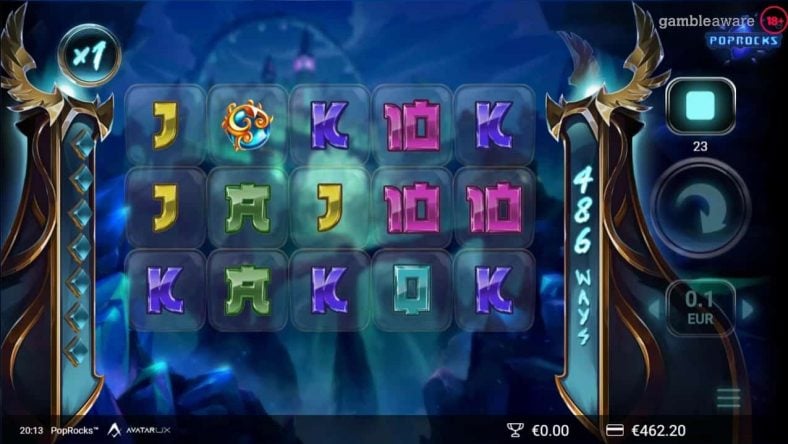 Young, aggressive and innovative, Yggdrasil Gaming is a constant reminder of how you can succeed in a highly competitive industry. It takes talent and dedication to your goals. Being one of many video slot producers located in Sweden, Yggdrassil could have been copying the recipe from their countrymen in established companies such as NetEnt.

However, they were struggling to do things their way, which resulted in many original solutions visible in their games. Understanding that their players belong to the younger generations, Yggdrassil does not compromise with the graphics. They know what the players want – inspiring visual solutions, high resolution and crisp graphics, supporting soundtracks, innovative gameplay options. And, they are doing their best to provide them.

The players are faced with the standard grid of 5 reels and 3 rows that do not spin as usual but rather pop up from left to right and bottom to top. Wait for the first win, though, and you will be surprised seeing the reels with the winning icons expanding while the others keep their 3 rows. As long as the winning streak continues the reels where the win combinations appear will continue their expansion but cannot surpass 7 rows.

PopRocks video slot features incredible 33,614 ways to win. Get 3 identical symbols on adjacent reels regardless of their positions, and you will make a winning combination. Starting with $0.10 and ending at $10, the wager range is not the biggest we’ve seen. The Autoplay button allows you to program a definite or indefinite number of auto-spins.

The very first feature that can be considered special in every way is Popwins, and it includes adding the rows to the reels containing winning combinations. Each symbol in a winning combination will pop, and you will receive 2 random symbols that will extend the reels. The maximum height of a reel cannot exceed 7 symbols. What is important to mention is that during this process, the multiplier is active.

It increases by 1 for every 7 symbols popped. When there are no more wins, the multiplier is reset, and the reels are back to the default of 3 rows. If you are lucky enough to expand all the reels to the maximum height of 7 symbols, another special feature will be triggered. The feature is dubbed Unlock Wild, and it includes 1 Wild symbol that is immediately awarded in a random position. Also, on every 7th symbol that pops the multiplier will increase by 2 instead of 1.

It is always nice to play a game that offers so many ways to make a winning combination. With the reel expansions followed by each win, the players gain more opportunities to make the successive wins.

This is the case because the winning ways are created with a minimum of 3 identical symbols on adjacent reels regardless of the rows they land on. With plenty of multipliers, the players can reach a maximum payout of incredible 72,188x bet.

Yggdrasil has made a hell of a job with the PopRocks video slot. Even without the distinctive theme, the game is a feast to the eye even before the reels start spinning. And when they do, it gets even better with symbols popping and reels expanding. The soundtrack is unobtrusive but aligned with the graphics and the dynamics of the game.

The Popwins feature brings the desired vigour and changes the player’s perception of the game. The reels can expand, creating asymmetrical layouts that can bring a lot of surprises. Most importantly, this PopRocks operates with amazing figures such as up to 33,614 ways to win and a maximum win of 72,188x bet. Now, if that is not worth the players’ attention, nothing is.