The early days of Las Vegas, that’s what Prime Zone is all about. The look is of a city in its beginnings, though even then there were huge casinos being built. With palm trees to the sides and with beautiful graphics everywhere you look, this Quickspin slot machine does a decent job at making itself enjoyable initially.

It’s just too bad that the beautiful surrounding graphics didn’t come with better symbols. The ones you see here are all classics, icons which we’ve seen in hundreds or thousands of other games.

The list of symbols will start with the Wild logo, continue with a Bonus logo, and then with red 7s, blue 7s,  Blue Diamonds, a Golden Bell and the four card suits (Heart, Spade, Clubs and Diamonds). Quality wise, they’re OK, but below what we’re seeing in the surrounding decorations. 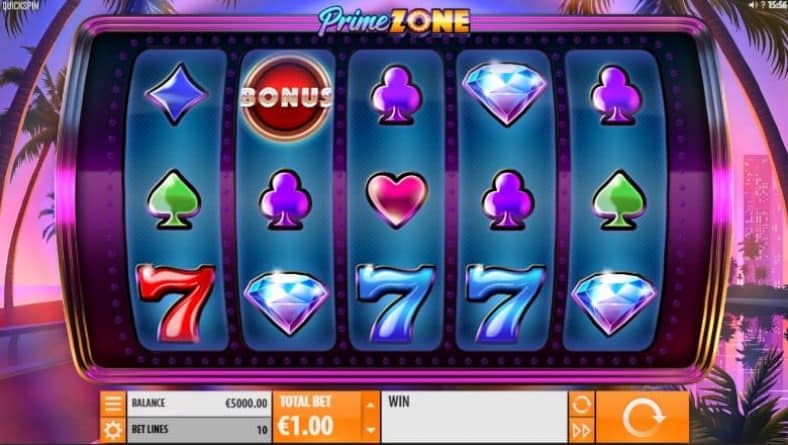 Based in Sweden, Quickspin is one of many game developers to originate from that country, most of which tend to offer similarly impressive graphics in their slots.

This is a company which I’d still consider young, even though it’s been around since 2012, and which tends to offer slots at a slower pace, while trying to keep the quality high. I’m a fan of many of their slots, including older titles like Tales of Dr Dolittle and Durian Dynamite, but also of recent ones, like Sticky Bandits 2.

You have the usual 5×3 reels, along with 10 fixed lines which can give you just as many wins in a single spin. There is nothing unusual about that. The game features progressive jackpots and several features which feel different, but nothing that’s too difficult to figure out.

One of the features which you should pay attention to, the Multiplier Wild needs to appear multiple times, in order to actually give you a boost in the value of your wins. These wilds appear on all five reels, and the multiplier of each one adds 1x to the total. For example, if you have three wild symbols in a single combo, that particular win will get a 3x boost. Up to 5x wild multipliers are possible. The wilds form their own wins as well, paying at most $10,000 per line.

The Bonus Scatter is another one to look into, a symbol which needs to appear on all three middle reels, to get you a Prime Zone Bonus. This includes 7 free spins, along with an option of the type of experience that you want from them.

You get paid the most when the wild symbols create their own combinations, and at that point up to $10,000 can be paid on each line.

The game has an even bigger potential, of up to 2,500x total stake, thanks to the multipliers which can sometimes kick in. I also appreciated the 96.28% RTP which has been announced for this slot machine, as it’s at a fairly high level.

Prime Zone is a good game, a slot machine with high enough potential and unique features, but with a classic theme and a design which is not as good as what we typically get from Quickspin.