Egypt might be a bit too popular as a theme among slot developers, but that doesn’t mean that a game can’t look great and stand out even so. Ramses Revenge is certainly proof of that, not only because of the quality of its graphics, but also because the design style is different from most of its competition.

Using its symbols almost like pieces on a chessboard, the view you have is from the top. The reels and the surrounding area makes it look like it’s an ancient game that was unearthed by archaeologists. Slabs of stone, a shovel and a pickaxe rest nearby.

Symbols are going to include an image of the Explorer, Mummies, Scarab mystery symbols, Ramses, Horus, Sobek, Anubis and four hieroglyphs representing birds, lotus flowers, Eye of Ra and the Ankh.

A developer of games, Relax Gaming also offers a software platform and has multiple partners using their Silver Bullet program to create and launch new slots. Their own collection has more than 50 titles in it, most of them excellent games with gorgeous graphics, big jackpots and plenty of features, just what you’d want to see. 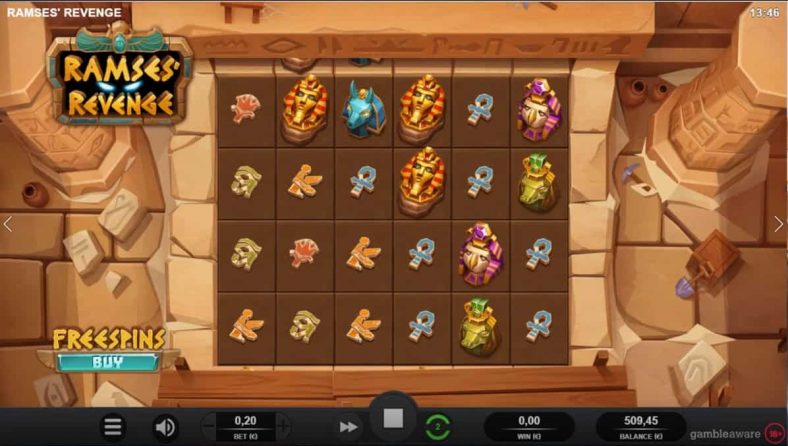 Played on 6×4 reels, Ramses Revenge delivers 4096 ways to win, which is the number of potential combinations that you can form in a single spin. To get paid, you need symbols of the same type landing on 3+ consecutive reels, going from the leftmost column to the right.

We’re in Egypt in this one, so naturally Sandstorms can occur. These Mystery Sandstorms will trigger at any moment, randomly, and will bring up to 4 symbols on the reels, repeating this between 2 and 6 times as the waves of the storm hit the game area. Once the feature has stopped adding symbols, they will transform into a single random symbol.

Some help can come from the Mummy symbol, which you can use as a substitute for all types of symbols on the reels.

As for the Explorer, this is your scatter symbol, which you need to show up 2 or more times. If that happens, you receive 6 free spins. The Explorers which triggered the feature will be replaced with Mummy Wilds. These remain in their current spots, until they can move to another scattered Explorer. These explorers will then bring you an increased multiplier for that particular Mummy Wild (+1x) and an extra free spin added to the total.

If there are more Explorers than Mummies, then the game adds more of the latter, to match the former.

An absolute monster of a top payout awaits the player in Ramses Revenge. 49,996x the stake is the highest prize that the game can deliver, which is an amount that I’m definitely happy with. RTP looks OK at the announced 96.15%, and the very high volatility is expected, if not welcomed.

Ramses Revenge can be a very rewarding game, but not for most players. I’d recommend the slot only to veterans that understand what kind of risk they’re taking in a highly volatile slot. Mostly, you’re going to be spending time in the base game, which is nowhere near as exciting or profitable as the free spins.